Imperfect fungi—those that do not display a sexual phase—use to be classified in the form phylum Deuteromycota, , a classification group no longer used in the present, ever-developing classification of organisms. While Deuteromycota use to be a classification group, recent moleclular analysis has shown that the members classified in this group belong to the Ascomycota or the Basidiomycota classifications. Since they do not possess the sexual structures that are used to classify other fungi, they are less well described in comparison to other members. Most members live on land, with a few aquatic exceptions. They form visible mycelia with a fuzzy appearance and are commonly known as mold.

Reproduction of the fungi in this group is strictly asexual and occurs mostly by production of asexual conidiospores (see the figure below). Some hyphae may recombine and form heterokaryotic hyphae. Genetic recombination is known to take place between the different nuclei. 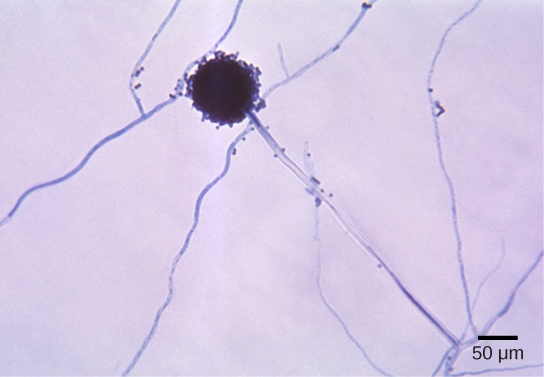 Aspergillus niger is an asexually reproducing fungus (phylum Ascomycota) commonly found as a food contaminant. The spherical structure in this light micrograph is a conidiophore. (credit: modification of work by Dr. Lucille Georg, CDC; scale-bar data from Matt Russell)

The fungi in this group have a large impact on everyday human life. The food industry relies on them for ripening some cheeses. The blue veins in Roquefort cheese and the white crust on Camembert are the result of fungal growth. The antibiotic penicillin was originally discovered on an overgrown Petri plate, on which a colony of Penicillium fungi killed the bacterial growth surrounding it. Other fungi in this group cause serious diseases, either directly as parasites (which infect both plants and humans), or as producers of potent toxic compounds, as seen in the aflatoxins released by fungi of the genus Aspergillus.