Biology » The Excretory System » The Kidneys and Osmoregulatory Organs

Externally, the kidneys are surrounded by three layers, illustrated in the figure below. The outermost layer is a tough connective tissue layer called the renal fascia. The second layer is called the perirenal fat capsule, which helps anchor the kidneys in place. The third and innermost layer is the renal capsule. Internally, the kidney has three regions—an outer cortex, a medulla in the middle, and the renal pelvis in the region called the hilum of the kidney. The hilum is the concave part of the bean-shape where blood vessels and nerves enter and exit the kidney; it is also the point of exit for the ureters. The renal cortex is granular due to the presence of nephrons—the functional unit of the kidney. 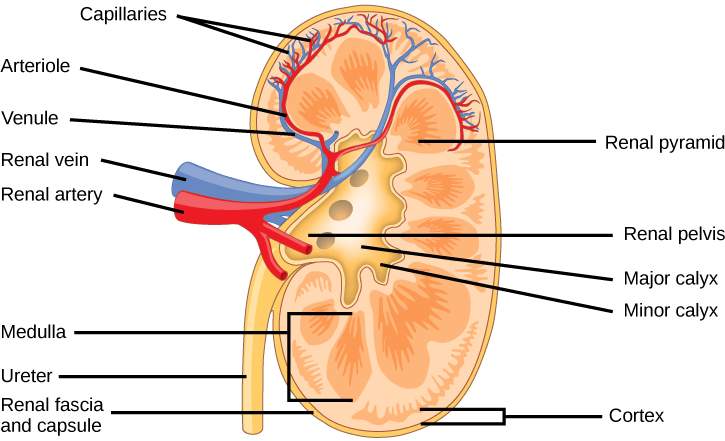 The internal structure of the kidney is shown. (credit: modification of work by NCI)

Which of the following statements about the kidney is false?

The cortex covers the capsule.

Because the kidney filters blood, its network of blood vessels is an important component of its structure and function. The arteries, veins, and nerves that supply the kidney enter and exit at the renal hilum. Renal blood supply starts with the branching of the aorta into the renal arteries (which are each named based on the region of the kidney they pass through) and ends with the exiting of the renal veins to join the inferior vena cava. The renal arteries split into several segmental arteries upon entering the kidneys.

Each segmental artery splits further into several interlobar arteries and enters the renal columns, which supply the renal lobes. The interlobar arteries split at the junction of the renal cortex and medulla to form the arcuate arteries. The arcuate “bow shaped” arteries form arcs along the base of the medullary pyramids. Corticalradiate arteries, as the name suggests, radiate out from the arcuate arteries. The cortical radiate arteries branch into numerous afferent arterioles, and then enter the capillaries supplying the nephrons. Veins trace the path of the arteries and have similar names, except there are no segmental veins.

As mentioned previously, the functional unit of the kidney is the nephron, illustrated in the figure below. Each kidney is made up of over one million nephrons that dot the renal cortex, giving it a granular appearance when sectioned sagittally. There are two types of nephrons—cortical nephrons (85 percent), which are deep in the renal cortex, and juxtamedullary nephrons (15 percent), which lie in the renal cortex close to the renal medulla. A nephron consists of three parts—a renal corpuscle, a renal tubule, and the associated capillary network, which originates from the cortical radiate arteries.

Which of the following statements about the nephron is false?

The collecting duct empties into the distal convoluted tubule.

The renal corpuscle, located in the renal cortex, is made up of a network of capillaries known as the glomerulus and the capsule, a cup-shaped chamber that surrounds it, called the glomerular or Bowman’s capsule.

The renal tubule is a long and convoluted structure that emerges from the glomerulus and can be divided into three parts based on function. The first part is called the proximal convoluted tubule (PCT) due to its proximity to the glomerulus; it stays in the renal cortex. The second part is called the loop of Henle, or nephritic loop, because it forms a loop (with descending and ascending limbs) that goes through the renal medulla. The third part of the renal tubule is called the distal convoluted tubule (DCT) and this part is also restricted to the renal cortex. The DCT, which is the last part of the nephron, connects and empties its contents into collecting ducts that line the medullary pyramids. The collecting ducts amass contents from multiple nephrons and fuse together as they enter the papillae of the renal medulla.

Capillary Network within the Nephron