Biology » The Excretory System » The Kidneys and Osmoregulatory Organs

Kidneys filter blood in a three-step process. First, the nephrons filter blood that runs through the capillary network in the glomerulus. Almost all solutes, except for proteins, are filtered out into the glomerulus by a process called glomerular filtration. Second, the filtrate is collected in the renal tubules. Most of the solutes get reabsorbed in the PCT by a process called tubular reabsorption. In the loop of Henle, the filtrate continues to exchange solutes and water with the renal medulla and the peritubular capillary network. Water is also reabsorbed during this step. Then, additional solutes and wastes are secreted into the kidney tubules during tubular secretion, which is, in essence, the opposite process to tubular reabsorption. The collecting ducts collect filtrate coming from the nephrons and fuse in the medullary papillae. From here, the papillae deliver the filtrate, now called urine, into the minor calyces that eventually connect to the ureters through the renal pelvis. This entire process is illustrated in the figure below. 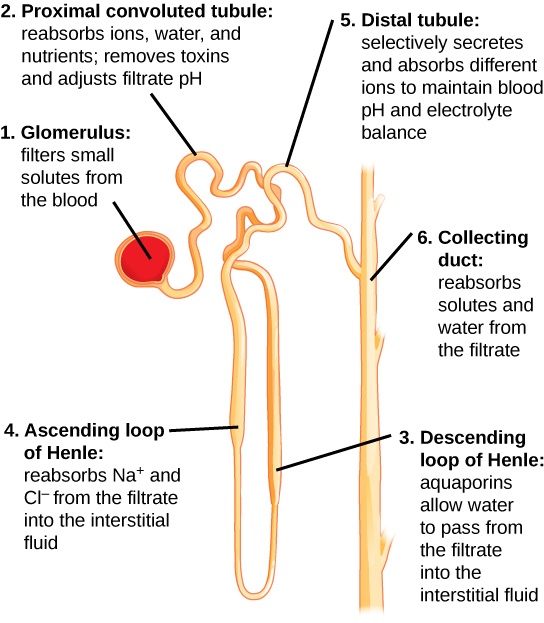 To learn more about the vascular system of kidneys, click through this review and the steps of blood flow.

Tubular reabsorption occurs in the PCT part of the renal tubule. Almost all nutrients are reabsorbed, and this occurs either by passive or active transport. Reabsorption of water and some key electrolytes are regulated and can be influenced by hormones. Sodium (Na+) is the most abundant ion and most of it is reabsorbed by active transport and then transported to the peritubular capillaries. Because Na+ is actively transported out of the tubule, water follows it to even out the osmotic pressure. Water is also independently reabsorbed into the peritubular capillaries due to the presence of aquaporins, or water channels, in the PCT. This occurs due to the low blood pressure and high osmotic pressure in the peritubular capillaries. However, every solute has a transport maximum and the excess is not reabsorbed.

In the loop of Henle, the permeability of the membrane changes. The descending limb is permeable to water, not solutes; the opposite is true for the ascending limb. Additionally, the loop of Henle invades the renal medulla, which is naturally high in salt concentration and tends to absorb water from the renal tubule and concentrate the filtrate. The osmotic gradient increases as it moves deeper into the medulla. Because two sides of the loop of Henle perform opposing functions, as illustrated in the figure below, it acts as a countercurrent multiplier. The vasa recta around it acts as the countercurrent exchanger. 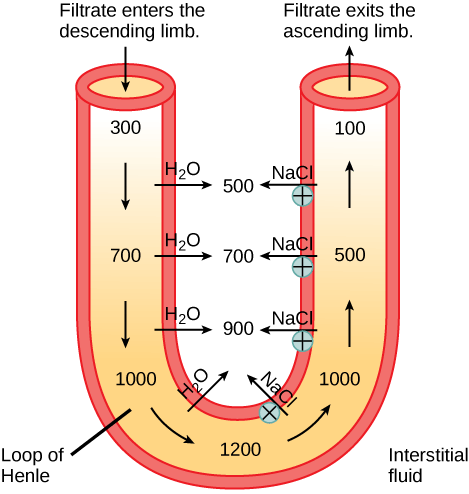 The loop of Henle acts as a countercurrent multiplier that uses energy to create concentration gradients. The descending limb is water permeable. Water flows from the filtrate to the interstitial fluid, so osmolality inside the limb increases as it descends into the renal medulla. At the bottom, the osmolality is higher inside the loop than in the interstitial fluid. Thus, as filtrate enters the ascending limb, Na+ and Cl– ions exit through ion channels present in the cell membrane. Further up, Na+ is actively transported out of the filtrate and Cl– follows. Osmolarity is given in units of milliosmoles per liter (mOsm/L).

Loop diuretics are drugs sometimes used to treat hypertension. These drugs inhibit the reabsorption of Na+ and Cl– ions by the ascending limb of the loop of Henle. A side effect is that they increase urination. Why do you think this is the case?

By the time the filtrate reaches the DCT, most of the urine and solutes have been reabsorbed. If the body requires additional water, all of it can be reabsorbed at this point. Further reabsorption is controlled by hormones, which will be discussed in a later section. Excretion of wastes occurs due to lack of reabsorption combined with tubular secretion. Undesirable products like metabolic wastes, urea, uric acid, and certain drugs, are excreted by tubular secretion. Most of the tubular secretion happens in the DCT, but some occurs in the early part of the collecting duct. Kidneys also maintain an acid-base balance by secreting excess H+ ions.

Although parts of the renal tubules are named proximal and distal, in a cross-section of the kidney, the tubules are placed close together and in contact with each other and the glomerulus. This allows for exchange of chemical messengers between the different cell types. For example, the DCT ascending limb of the loop of Henle has masses of cells called macula densa, which are in contact with cells of the afferent arterioles called juxtaglomerular cells. Together, the macula densa and juxtaglomerular cells form the juxtaglomerular complex (JGC). The JGC is an endocrine structure that secretes the enzyme renin and the hormone erythropoietin. When hormones trigger the macula densa cells in the DCT due to variations in blood volume, blood pressure, or electrolyte balance, these cells can immediately communicate the problem to the capillaries in the afferent and efferent arterioles, which can constrict or relax to change the glomerular filtration rate of the kidneys.

A nephrologist studies and deals with diseases of the kidneys—both those that cause kidney failure (such as diabetes) and the conditions that are produced by kidney disease (such as hypertension). Blood pressure, blood volume, and changes in electrolyte balance come under the purview of a nephrologist.

Nephrologists usually work with other physicians who refer patients to them or consult with them about specific diagnoses and treatment plans. Patients are usually referred to a nephrologist for symptoms such as blood or protein in the urine, very high blood pressure, kidney stones, or renal failure.