Biology » Evolution » Darwin and the Theory of Evolutions

How do new species form?

This is the only illustration in Charles Darwin’s 1859 book On the Origin of Species, showing his ideas describing the divergence of species from common ancestors.

Darwin spent many years thinking about the work of Lamarck, Lyell, and Malthus, what he had seen on his voyage, and artificial selection. What did all this mean? How did it all fit together? It fits together in Darwin’s theory of evolution by natural selection. It’s easy to see how all of these influences helped shape Darwin’s ideas.

It took Darwin years to form his theory of evolution by natural selection. His reasoning went like this:

Wallace’s paper not only confirmed Darwin’s ideas. It also pushed him to finish his book, On the Origin of Species. Published in 1859, this book changed science forever. It clearly spelled out Darwin’s theory of evolution by natural selection and provided convincing arguments and evidence to support it.

The following example applies Darwin’s theory. It explains how giraffes came to have such long necks (see the figure below). 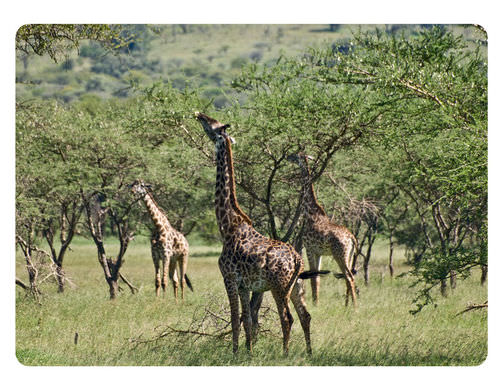 Giraffes feed on leaves high in trees. Their long necks allow them to reach leaves that other ground animals cannot.

As this example shows, chance variations may help a species survive if the environment changes. Variation among species helps ensure that at least one will be able to survive environmental change.

It’s been over 150 years since Charles Darwin published On the Origin of Species. Yet his ideas remain as central to scientific exploration as ever, and has been called the unifying concept of all biology. Is evolution continuing today? Of course it is.

QUEST follows researchers who are still unlocking the mysteries of evolution, including entomologist David Kavanaugh of the California Academy of Sciences, who predicted that a new beetle species would be found on the Trinity Alps of Northern California.

It’s rare for a biologist to predict the discovery of a new species. For his prediction, Kavanaugh drew inspiration from Darwin’s own 1862 prediction. When Darwin observed an orchid from Madagascar with a foot-long nectar, he predicted that a pollinator would be found with a tongue long enough to reach the nectar inside the orchid’s very thin, elongated nectar “pouch”, though he had never seen such a bird or insect. Darwin’s prediction was based on his finding that all species are related to each other and that some of them evolve together, developing similar adaptations. Darwin’s prediction came true in 1903, when a moth was discovered in Madagascar with a long, thin proboscis, which it uncurls to reach the nectar in the orchid’s nectar. In the process of feeding from the orchid, the moth serves as its pollinator. The moth was given the scientific name Xanthopan morganii praedicta, in honor of Darwin’s prediction.

As you view Chasing Beetles, Finding Darwin, focus on the following concepts:

Orchids utilize a wide variety of techniques to manipulate other species into becoming their pollinators. In this video by , curator Marc Hachadourian describes some of these deceptive methods.