What exactly is a dinosaur?

Two dinosaurs wade through shallow waters to get to the vegetation on this island. The Mesozoic Era is the age of dinosaurs. These animals grew so large they dominated the planet. Dinosaurs were so dominant that it took a catastrophic, environment-changing event for mammals to be able to take over.

Mesozoic Era: The Age of Dinosaurs

The Mesozoic Era is literally the era of “middle life.” It is also known as the age of dinosaurs. It lasted from 245 to 65 million years ago and is divided into the three periods described in the figure below. The Mesozoic began with the supercontinent Pangaea. Then, during the era, Pangaea broke up and the continents drifted apart. The movement of continents changed climates. It also caused tremendous volcanic activity.

Mass extinctions occurred at the end of the Triassic and Cretaceous Periods. The first extinction paved the way for a dinosaur takeover. In the second extinction, the dinosaurs finally disappeared. 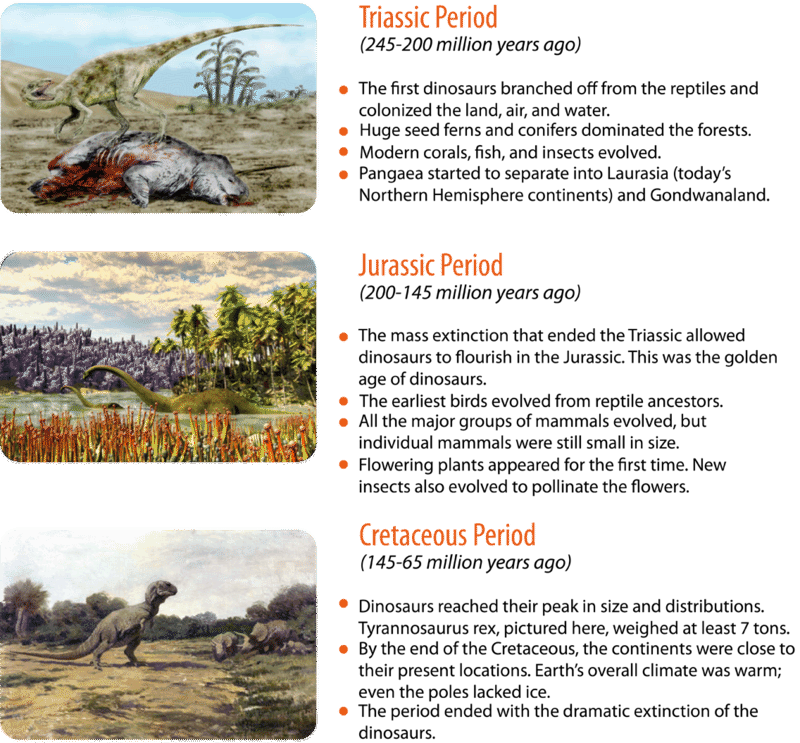 The Mesozoic Era consists of the three periods described here.

The Cretaceous Period: During the Cretaceous Period (145–65 million years ago), dinosaurs reached their peak in size and distribution. Tyrannosaurus Rex, weighed at least 7 tons. By the end of the Cretaceous, the continents were close to their present locations. Earth’s overall climate was warm; even the poles lacked ice. The period ended with the dramatic extinction of the dinosaurs.

What happened to the dinosaurs? Why did they go extinct at the end of the Cretaceous Period? Some scientists think a comet or asteroid may have collided with Earth, causing skies to darken, photosynthesis to shut down, and climates to change. A collision was probably at least a contributing factor. Without the dinosaurs, there were many opportunities for new organisms to exploit in the next era, the Cenozoic. Which living things do you think took over where the dinosaurs left off?