How do we learn about the past?

We study the remains of things that existed many years ago. The Ruins of Pompeii have given archeologists, historians, and other scholars a tremendous amount of information about life two thousand years ago. This section discusses studying things that are many thousands of years older than these remains.

Earth in a Day

It’s hard to grasp the vast amounts of time since Earth formed and life first appeared on its surface. It may help to think of Earth’s history as a 24-hour day, as shown in the figure below. Humans would have appeared only during the last minute of that day. If we are such newcomers on planet Earth, how do we know about the vast period of time that went before us? How have we learned about the distant past?

History of Earth in a Day. In this model of Earth’s history, the planet formed at midnight. What time was it when the first prokaryotes evolved?

Learning About the Past

Much of what we know about the history of life on Earth is based on the fossil record. Detailed knowledge of modern organisms also helps us understand how life evolved.

Fossils are the preserved remains or traces of organisms that lived in the past. The soft parts of organisms almost always decompose quickly after death. On occasion, the hard parts—mainly bones, teeth, or shells—remain long enough to mineralize and form fossils. An example of a complete fossil skeleton is shown in the figure below. The fossil record is the record of life that unfolded over four billion years and pieced back together through the analysis of fossils. 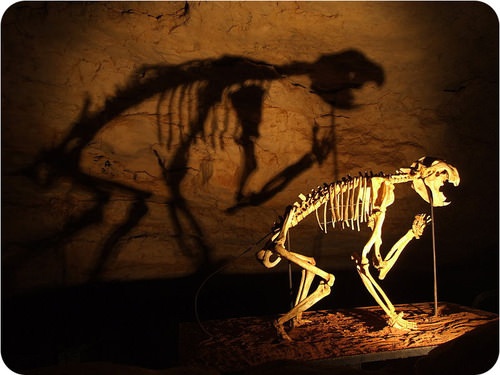 Extinct Lion Fossil. This fossilized skeleton represents an extinct lion species. It is rare for fossils to be so complete and well preserved as this one.

To be preserved as fossils, remains must be covered quickly by sediments or preserved in some other way. For example, they may be frozen in glaciers or trapped in tree resin, like the frog in the figure below. Sometimes traces of organisms—such as footprints or burrows—are preserved (see the fossil footprints in the figure below). The conditions required for fossils to form rarely occur. Therefore, the chance of an organism being preserved as a fossil is very low.

In order for fossils to “tell” us the story of life, they must be dated. Then they can help scientists reconstruct how life changed over time. Fossils can be dated in two different ways: relative dating and absolute dating. Both are described below. 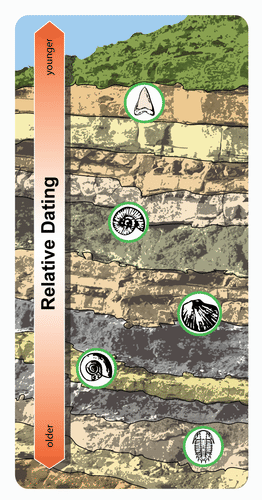 Relative Dating Using Rock Layers. Relative dating establishes which of two fossils is older than the other. It is based on the rock layers in which the fossils formed.

Consider the example in Table below. The table shows how similar the DNA of several animal species is to human DNA. Based on these data, which organism do you think shared the most recent common ancestor with humans?

Another tool for understanding the history of Earth and its life is the geologic time scale, shown in the figure below. The geologic time scale divides Earth’s history into divisions (such as eons, eras, and periods) that are based on major changes in geology, climate, and the evolution of life. It organizes Earth’s history and the evolution of life on the basis of important events instead of time alone. It also allows more focus to be placed on recent events, about which we know the most. 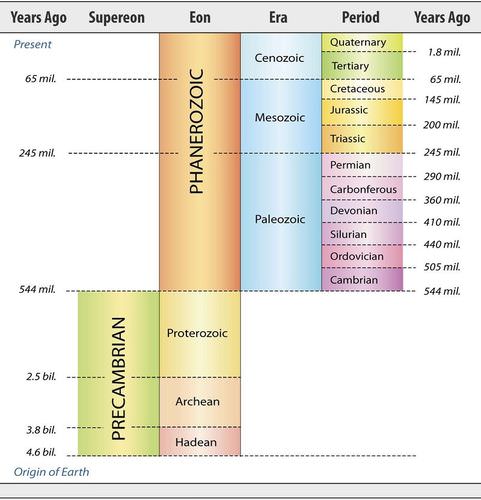 Geologic Time Scale. The geologic time scale divides Earth’s history into units that reflect major changes in Earth and its life forms. During which eon did Earth form? What is the present era?