What alien planet is represented by this picture?

Would it surprise you to learn that the picture represents Earth? After Earth first formed about 4.6 billion years ago, it may well have looked like this. Instead of rivers of water, rivers of molten rock flowed over its surface. Life as we know it could not have survived in such a place. How did this fiery hot planet become today’s Earth, covered with water and teeming with life? The long and incredible story of Earth’s history starts with this section.

How Earth Formed: We Are Made of Stardust!

We’ll start the story of life at the very beginning, when Earth and the rest of the solar system first formed. The solar system began as a rotating cloud of stardust. “Dust, rocks, and gas” may not sound inspiring, but this cloud contained the elements which somehow combine to form every corner – living and nonliving – of Earth. Initially, the Big Bang (14 billion years ago) gave rise to the building blocks of matter  the quarks and electrons of which we are all made. Quarks aggregated producing protons and neutrons which combined into nuclei, ultimately forming the first atoms which were mainly hydrogen and helium. Stars such as red giants fused hydrogen and helium nuclei to form elements from carbon (the foundation of life) to calcium (now our bones and teeth). Supernova explosions formed and ejected heavier elements such as iron (for red blood cells). We are not just “dust.” We – and our world – are stardust!

How did this rotating cloud of stardust become our solar system? About 4.5 billion years ago, a nearby star exploded and sent a shock wave through the dust cloud, increasing its rate of spin. As a result, most of the mass became concentrated in the middle, forming the sun. Smaller concentrations of mass rotating around the center formed the planets, including Earth.

At first, Earth was molten and lacked an atmosphere and oceans. Gradually, the planet cooled and formed a solid crust. As the planet continued to cool, volcanoes released gases, which eventually formed an atmosphere. The early atmosphere contained ammonia, methane, water vapor, and carbon dioxide but only a trace of oxygen. As the atmosphere became denser, clouds formed and rain fell. Water from rain, and perhaps from comets and asteroids that struck Earth as well, eventually formed the oceans. The ancient atmosphere and oceans represented by the picture in the figure below would be toxic to today’s life, but they set the stage for life to begin. 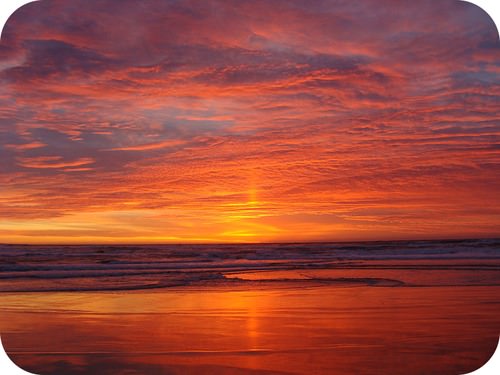 Ancient Earth. This is how ancient Earth may have looked after its atmosphere and oceans formed.