How do a population’s genes change?

Remember, without change, there cannot be evolution. Together, the forces that change a population’s gene frequencies are the driving mechanisms behind evolution.

The conditions for Hardy-Weinberg equilibrium are unlikely to be met in real populations. The Hardy-Weinberg theorem also describes populations in which allele frequencies are not changing. By definition, such populations are not evolving. How does the theorem help us understand evolution in the real world?

From the theorem, we can infer factors that cause allele frequencies to change. These factors are the “forces of evolution.” There are four such forces: mutation, gene flow, genetic drift, and natural selection. Natural selection will be discussed in the “Natural Selection” concept.

Mutation creates new genetic variation in a gene pool. It is how all new alleles first arise. In sexually reproducing species, the mutations that matter for evolution are those that occur in gametes. Only these mutations can be passed to offspring. For any given gene, the chance of a mutation occurring in a given gamete is very low. Thus, mutations alone do not have much effect on allele frequencies. However, mutations provide the genetic variation needed for other forces of evolution to act.

During the Vietnam War in the 1960s and 1970s, many American servicemen had children with Vietnamese women. Most of the servicemen returned to the United States after the war. However, they left copies of their genes behind in their offspring. In this way, they changed the allele frequencies in the Vietnamese gene pool. Was the gene pool of the American population also affected? Why or why not?

There are two special conditions under which genetic drift occurs. They are called bottleneck effect and founder effect. 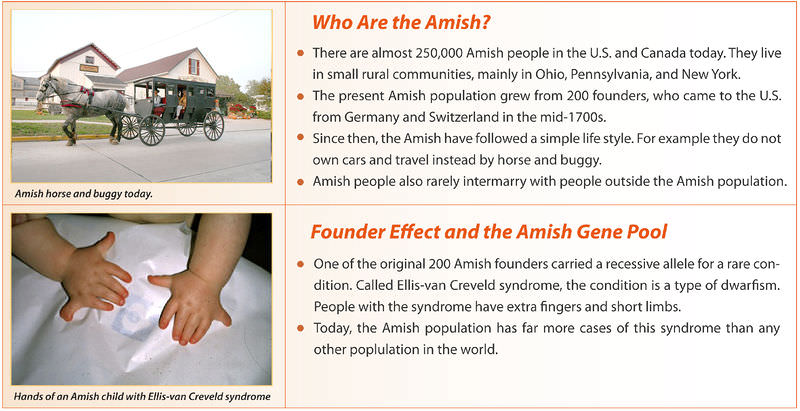 Founder Effect in the Amish Population. The Amish population in the U.S. and Canada had a small number of founders. How has this affected the Amish gene pool?