How do you make large molecules?

All living things consist of organic molecules, centered around the element carbon. Therefore, it is likely that organic molecules evolved before cells, perhaps as long as 4 billion years ago. How did these building blocks of life first form?

Scientists think that lightning sparked chemical reactions in Earth’s early atmosphere. The early atmosphere contained gases such as ammonia, methane, water vapor, and carbon dioxide. Scientists hypothesize that this created a “soup” of organic molecules from inorganic chemicals. In 1953, scientists Stanley Miller and Harold Urey used their imaginations to test this hypothesis. They created a simulation experiment to see if organic molecules could arise in this way (see the figure below). They used a mixture of gases to represent Earth’s early atmosphere. Then, they passed sparks through the gases to represent lightning. Within a week, several simple organic molecules had formed. 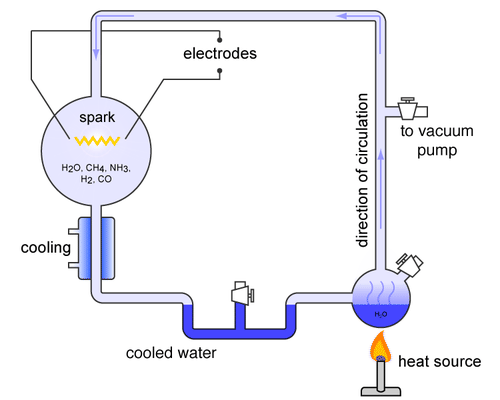 Miller and Urey’s Experiment. Miller and Urey demonstrated that organic molecules could form under simulated conditions of early Earth. What assumptions were their simulation based upon?

Living things need organic molecules to store genetic information and to carry out the chemical work of cells. Modern organisms use DNA to store genetic information and proteins to catalyze chemical reactions. So, did DNA or proteins evolve first? This is like asking whether the chicken or the egg came first. DNA encodes proteins and proteins are needed to make DNA, so each type of organic molecule needs the other for its own existence. How could either of these two molecules have evolved before the other? Did some other organic molecule evolve first, instead of DNA or proteins?

Some scientists speculate that RNA may have been the first organic molecule to evolve. In fact, they think that early life was based solely on RNA and that DNA and proteins evolved later. This is called the RNA world hypothesis. Why RNA? It can encode genetic instructions (like DNA), and some RNAs can carry out chemical reactions (like proteins). Therefore, it solves the chicken-and-egg problem of which of these two molecules came first. Other evidence also suggests that RNA may be the most ancient of the organic molecules.