How do you make complex cells?

You start with simple ones. The first cells were most likely primitive prokaryotic-like cells, even more simplistic than these E. coli bacteria. The first cells were probably no more than organic compounds, such as a simplistic RNA, surrounded by a membrane. Was it a phospholipid bilayer membrane? Probably not — it was likely a simplistic membrane able to separate the inside from the outside. Over time, as other organic compounds such as DNA and proteins developed, cells also evolved into more complex structures. Once a cell was able to be stable, reproduce itself, and pass its genetic information to the next generation, then there was life.

What was needed for the first cell? Some sort of membrane surrounding organic molecules? Probably. 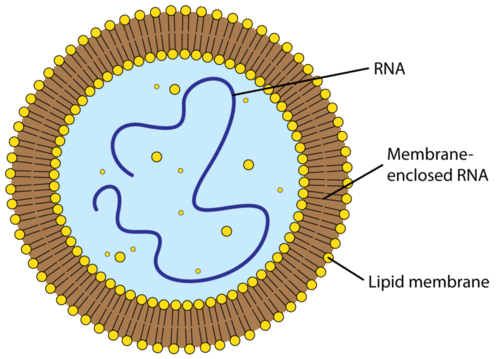 Hypothetical First Cell. The earliest cells may have consisted of little more than RNA inside a lipid membrane.

No doubt there were many early cells of this type. However, scientists think that only one early cell (or group of cells) eventually gave rise to all subsequent life on Earth. That one cell is called the Last Universal Common Ancestor (LUCA). It probably existed around 3.5 billion years ago. LUCA was one of the earliest prokaryotic cells. It would have lacked a nucleus and other membrane-bound organelles.

The earliest cells were probably heterotrophs. Most likely they got their energy from other molecules in the organic “soup.” However, by about 3 billion years ago, a new way of obtaining energy evolved. This new way was photosynthesis. Through photosynthesis, organisms could use sunlight to make food from carbon dioxide and water. These organisms were the first autotrophs. They provided food for themselves and for other organisms that began to consume them.

After photosynthesis evolved, oxygen started to accumulate in the atmosphere. This has been dubbed the “oxygen catastrophe.” Why? Oxygen was toxic to most early cells because they had evolved in its absence. As a result, many of them died out. The few that survived evolved a new way to take advantage of the oxygen. This second major innovation was cellular respiration. It allowed cells to use oxygen to obtain more energy from organic molecules.