Is this evidence of evolution?

Take a close look at this gorilla hand. The similarities to a human hand are remarkable. Comparing anatomy, and characterizing the similarities and differences, provides evidence of evolution.

Just as Darwin did many years ago, today’s scientists study living species to learn about evolution. They compare the anatomy, embryos, and DNA of modern organisms to understand how they evolved.

Comparative anatomy is the study of the similarities and differences in the structures of different species. Similar body parts may be homologies or analogies. Both provide evidence for evolution. 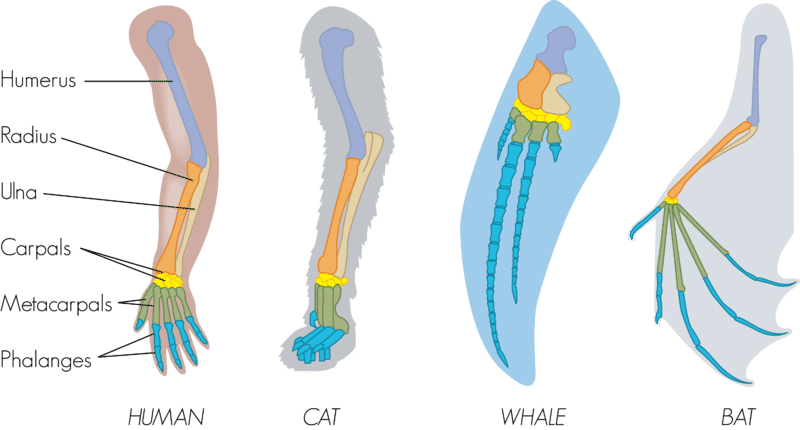 The forelimbs of all mammals have the same basic bone structure.

Analogous structures are structures that are similar in unrelated organisms. The structures are similar because they evolved to do the same job, not because they were inherited from a common ancestor. For example, the wings of bats and birds, shown in the figure below, look similar on the outside. They also have the same function. However, wings evolved independently in the two groups of animals. This is apparent when you compare the pattern of bones inside the wings. 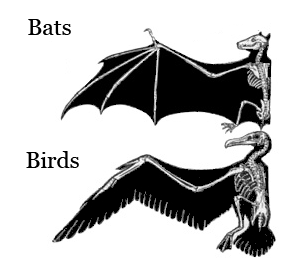 Wings of bats and birds serve the same function. Look closely at the bones inside the wings. The differences show they developed from different ancestors.

Comparative embryology is the study of the similarities and differences in the embryos of different species. Similarities in embryos are evidence of common ancestry. All vertebrate embryos, for example, have gill slits and tails. Most vertebrates, except for fish, lose their gill slits by adulthood. Some of them also lose their tail. In humans, the tail is reduced to the tail bone. Thus, similarities organisms share as embryos may be gone by adulthood. This is why it is valuable to compare organisms in the embryonic stage.

Structures like the human tail bone and whale pelvis are called vestigial structures. Evolution has reduced their size because the structures are no longer used. The human appendix is another example of a vestigial structure. It is a tiny remnant of a once-larger organ. In a distant ancestor, it was needed to digest food. It serves no purpose in humans today. Why do you think structures that are no longer used shrink in size? Why might a full-sized, unused structure reduce an organism’s fitness?

Darwin could compare only the anatomy and embryos of living things. Today, scientists can compare their DNA. Similar DNA sequences are the strongest evidence for evolution from a common ancestor. More similarities in the DNA sequence is evidence for a closer evolutionary relationship. Look at the cladogram in the the figure below. It shows how humans and apes are related based on their DNA sequences. 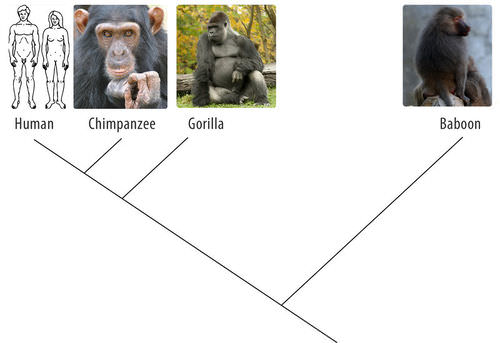 Cladogram of Humans and Apes. This cladogram is based on DNA comparisons. It shows how humans are related to apes by descent from common ancestors.