Biology » Evolution » Macroevolution and the Origin of Species

How can a predator, such as a wolf, influence evolution?

Wolves hunt caribou, chasing them down to capture them. The slower caribou are more likely to become lunch or dinner, leaving the faster individuals to reproduce. The resulting faster offspring will be even more difficult for the wolves to catch, and only the fastest wolves – or perhaps the wolves who are genetically capable of developing methods to hunt very fast prey – will get enough food to survive. This is coevolution in action.

Evolution occurs in response to a change in the environment. Environmental change often involves other species of organisms. In fact, species in symbiotic relationships tend to evolve together. This is called coevolution. As one species changes, the other species must also change in order to adapt.

Coevolution occurs in flowering plants and the species that pollinate them. The flower and bird in the figure below are a good example. They have evolved matching structures. 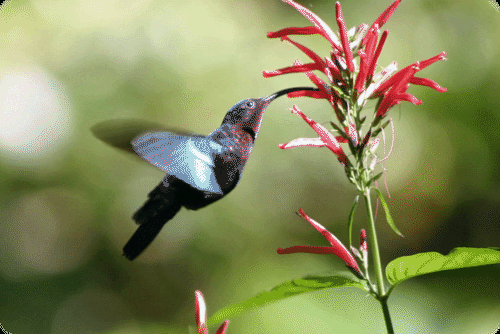 Results of Coevolution in a Flower and Its Pollinator. The very long mouth part of this hummingbird has coevolved with the tubular flower it pollinates. Only this species of bird can reach the nectar deep in the flower. What might happen to the flower if the bird species went extinct?

In coevolution, relationships may be positive for one species or both, or may be an evolutionary arms race between predator and prey. Flowering plants depend on insects for pollination, so have evolved colors, shapes, scents, and even food supplies that are attractive to certain insect species. Insects, in turn, have evolved mouthparts, senses, and flight patterns that allow them to respond to and benefit from specific floral “offerings,” shown in the the figure below. 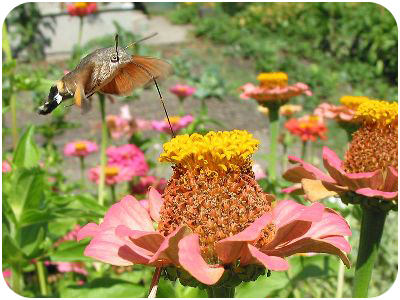 Impressive proboscis and vivid colors! Hawk moths and the zinnias influence each other’s evolution, because the flower depends on the moth for pollination, and the moth feeds on the flower.

The endosymbiotic theory describes a special form of co-evolution: mitochondria and chloroplasts evolve within eukaryote cells, yet because these organelles have their own DNA sequence, different from that of the nucleus in the “host” cell, the organelle and host cell evolve in tandem â€“ each influences the evolution of the other.

Orchids utilize a wide variety of techniques to manipulate other species into becoming their pollinators. In this video by Science Friday curator Marc Hachadourian describes some of these deceptive methods.