In biology, what is classification?

There are millions and millions of species, so classifying organisms into proper categories can be a difficult task. To make it easier for all scientists to do, a classification system had to be developed.

The evolution of life on Earth over the past 4 billion years has resulted in a huge variety of species. For more than 2,000 years, humans have been trying to classify the great diversity of life. The science of classifying organisms is called taxonomy. Classification is an important step in understanding the present diversity and past evolutionary history of life on Earth.

All modern classification systems have their roots in the Linnaean classification system. It was developed by Swedish botanist Carolus Linnaeus in the 1700s. He tried to classify all living things that were known at his time. He grouped together organisms that shared obvious physical traits, such as number of legs or shape of leaves. For his contribution, Linnaeus is known as the “father of taxonomy.”

The Linnaean system of classification consists of a hierarchy of groupings, called taxa (singular, taxon). Taxa range from the kingdom to the species (see the figure below). The kingdom is the largest and most inclusive grouping. It consists of organisms that share just a few basic similarities. Examples are the plant and animal kingdoms. The species is the smallest and most exclusive grouping. It consists of organisms that are similar enough to produce fertile offspring together. Closely related species are grouped together in a genus. 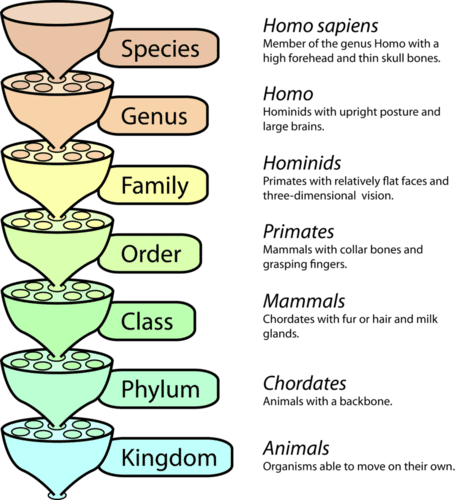 Perhaps the single greatest contribution Linnaeus made to science was his method of naming species. This method, called binomial nomenclature, gives each species a unique, two-word Latin name consisting of the genus name and the species name. An example is Homo sapiens, the two-word Latin name for humans. It literally means “wise human.” This is a reference to our big brains.

Why is having two names so important? It is similar to people having a first and a last name. You may know several people with the first name Michael, but adding Michael’s last name usually pins down exactly whom you mean. In the same way, having two names uniquely identifies a species.

Linnaeus published his classification system in the 1700s. Since then, many new species have been discovered. The biochemistry of many organisms has also become known. Eventually, scientists realized that Linnaeus’s system of classification needed revision.

A major change to the Linnaean system was the addition of a new taxon called the domain. A domain is a taxon that is larger and more inclusive than the kingdom. Most biologists agree there are three domains of life on Earth: Bacteria, Archaea, and Eukaryota (see the figure below). Both Bacteria and Archaea consist of single-celled prokaryotes. Eukaryota consists of all eukaryotes, from single-celled protists to humans. This domain includes the Animalia (animals), Plantae (plants), Fungi (fungi), and Protista (protists) kingdoms. 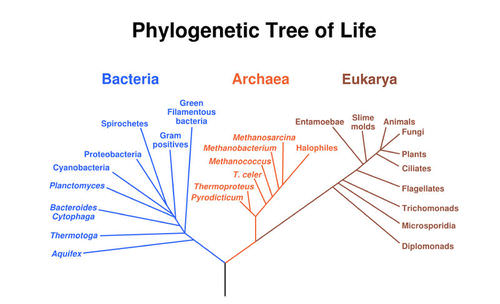 This phylogenetic tree is based on comparisons of ribosomal RNA base sequences among living organisms. The tree divides all organisms into three domains: Bacteria, Archaea, and Eukarya. Humans and other animals belong to the Eukarya domain. From this tree, organisms that make up the domain Eukarya appear to have shared a more recent common ancestor with Archaea than Bacteria.

What do you call a tiny octopus with big eyes, gelatinous skin and is cute as a button? Nobody knows quite yet! In this video by , Stephanie Bush aims to classify and name this presently undescribed deep-sea cephalopod.