What allowed mammals to outlast the dinosaurs?

With dinosaurs around, mammals could not thrive. It took a catastrophic event to rid the planet of dinosaurs. Luckily for mammals, the extinction of the dinosaurs left many opportunities for mammals to take over and flourish.

The Cenozoic Era: Age of Mammals

The Cenozoic Era literally means the era of “modern life.” It is also called the age of mammals. Mammals took advantage of the extinction of the dinosaurs. They flourished and soon became the dominant animals on Earth. You can learn more about the evolution of mammals during the Cenozoic at the link below. The Cenozoic began 65 million years ago and continues to the present. It may be divided into the two periods described in the figure below. 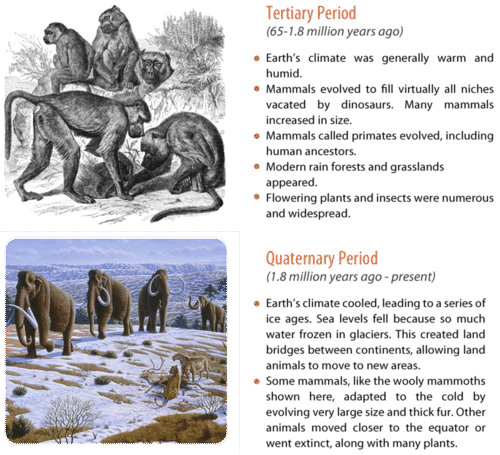 One way of dividing the Cenozoic Era is into the two periods described here.

The Tertiary Period: During the Tertiary Period (65–1.8 million years ago), Earth’s climate was generally warm and humid. This allowed mammals to evolve further and fill virtually all niches vacated by the dinosaurs. Many mammals increased in size. Mammals called primates evolved, including human ancestors. Modern rain forests and grasslands appeared, and flowering plants and insects were numerous and widespread.

The Quaternary Period: During the Quaternary Period (1.8 million years ago–present), Earth’s climate cooled, leading to a series of ice ages. Sea levels fell because so much water was frozen in glaciers. This created land bridges between continents, allowing land animals to move to new areas. Some mammals, like the woolly mammoths adapted to the cold by evolving very large size and thick fur. Other animals moved closer to the equator or went extinct, along with many plants.

The last ice age ended about 12,000 years ago. By that time, our own species, Homo sapiens, had evolved. After that, we were witnesses to the unfolding of life’s story. Although we don’t know all the details of the recent past, it is far less of a mystery than the billions of years that preceded it.

Imagine a vast grassy ecosystem covered with herds of elephants, bison, and camels stretching as far as the eye can see. Africa? Maybe. But this also describes Northern California at the end of the last Ice Age. What happened to all this wildlife? Were they over-hunted and killed off? Did global warming destroy their populations? Scientists are not sure, but this relatively recent loss of life does raise many interesting questions.