Why would geography have anything to do with evolution?

Similar to “how did the chicken cross the road?” but on a much grander scale. How did the animal cross Europe and into Asia? Or Asia into America? How did anything get into Australia?

Biogeography is the study of how and why plants and animals live where they do. It provides more evidence for evolution. Let’s consider the camel family as an example.

Biogeography of Camels: An Example

Today, the camel family includes different types of camels. They are shown in the figure below. All of today’s camels are descended from the same camel ancestors. These ancestors lived in North America about a million years ago. 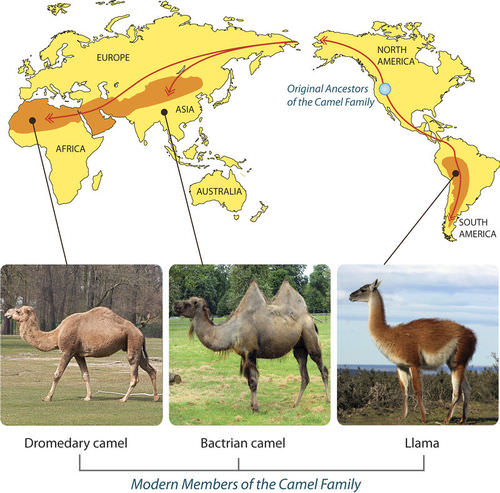 Camel Migrations and Present-Day Variation. Members of the camel family now live in different parts of the world. They differ from one another in a number of traits. However, they share basic similarities. This is because they all evolved from a common ancestor. What differences and similarities do you see?

Early North American camels migrated to other places. Some went to East Asia. They crossed a land bridge during the last ice age. A few of them made it all the way to Africa. Others went to South America. They crossed the Isthmus of Panama. Once camels reached these different places, they evolved independently. They evolved adaptations that suited them for the particular environment where they lived. Through natural selection, descendants of the original camel ancestors evolved the diversity they have today.

The biogeography of islands yields some of the best evidence for evolution. Consider the birds called finches that Darwin studied on the Galápagos Islands (see the figure below). All of the finches probably descended from one bird that arrived on the islands from South America. Until the first bird arrived, there had never been birds on the islands. The first bird was a seed eater. It evolved into many finch species. Each species was adapted for a different type of food. This is an example of adaptive radiation. This is the process by which a single species evolves into many new species to fill available niches. 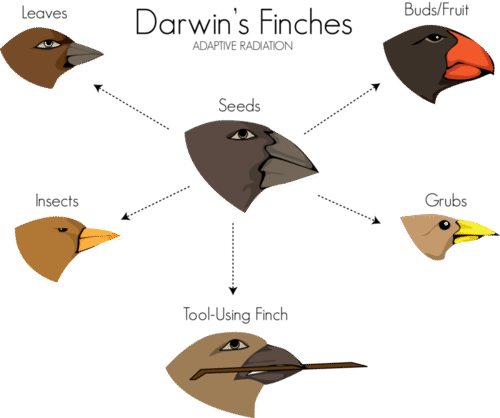 Galápagos finches differ in beak size and shape, depending on the type of food they eat.

In the 1970s, biologists Peter and Rosemary Grant went to the Galápagos Islands. They wanted to re-study Darwin’s finches. They spent more than 30 years on the project. Their efforts paid off. They were able to observe evolution by natural selection actually taking place.

While the Grants were on the Galápagos, a drought occurred. As a result, fewer seeds were available for finches to eat. Birds with smaller beaks could crack open and eat only the smaller seeds. Birds with bigger beaks could crack and eat seeds of all sizes. As a result, many of the small-beaked birds died in the drought. Birds with bigger beaks survived and reproduced (see the figure below). Within 2 years, the average beak size in the finch population increased. Evolution by natural selection had occurred. 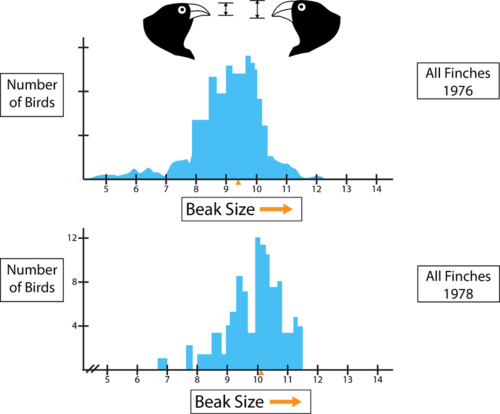