Biology » Evolution and Origin of Species » Formation of New Species

Can divergence occur if no physical barriers are in place to separate individuals who continue to live and reproduce in the same habitat? The answer is yes. The process of speciation within the same space is called sympatric speciation; the prefix “sym” means same, so “sympatric” means “same homeland” in contrast to “allopatric” meaning “other homeland.” A number of mechanisms for sympatric speciation have been proposed and studied.

One form of sympatric speciation can begin with a serious chromosomal error during cell division. In a normal cell division event chromosomes replicate, pair up, and then separate so that each new cell has the same number of chromosomes. However, sometimes the pairs separate and the end cell product has too many or too few individual chromosomes in a condition called aneuploidy (see the figure below). 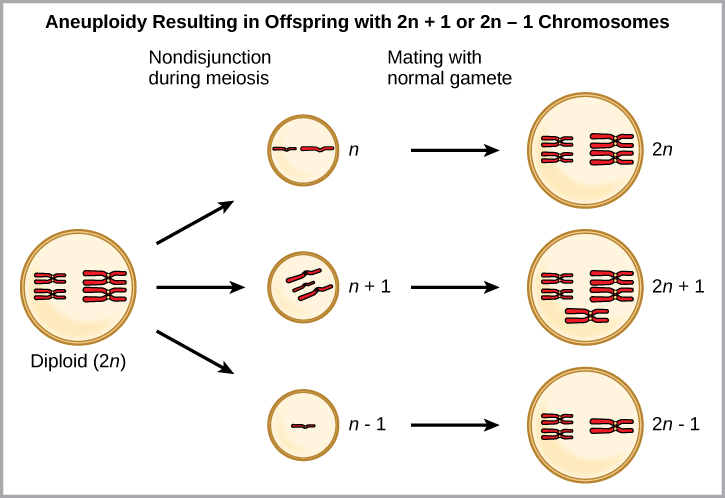 Aneuploidy results when the gametes have too many or too few chromosomes due to nondisjunction during meiosis. In the example shown here, the resulting offspring will have 2n+1 or 2n-1 chromosomes

Loss of genetic material is almost always lethal, so offspring with 2n+1 chromosomes are more likely to survive.

Polyploidy is a condition in which a cell or organism has an extra set, or sets, of chromosomes. Scientists have identified two main types of polyploidy that can lead to reproductive isolation of an individual in the polyploidy state. Reproductive isolation is the inability to interbreed. In some cases, a polyploid individual will have two or more complete sets of chromosomes from its own species in a condition called autopolyploidy (see the figure below). The prefix “auto-” means “self,” so the term means multiple chromosomes from one’s own species. Polyploidy results from an error in meiosis in which all of the chromosomes move into one cell instead of separating.

Autopolyploidy results when mitosis is not followed by cytokinesis.

For example, if a plant species with 2n = 6 produces autopolyploid gametes that are also diploid (2n = 6, when they should be n = 3), the gametes now have twice as many chromosomes as they should have. These new gametes will be incompatible with the normal gametes produced by this plant species. However, they could either self-pollinate or reproduce with other autopolyploid plants with gametes having the same diploid number. In this way, sympatric speciation can occur quickly by forming offspring with 4n called a tetraploid. These individuals would immediately be able to reproduce only with those of this new kind and not those of the ancestral species. 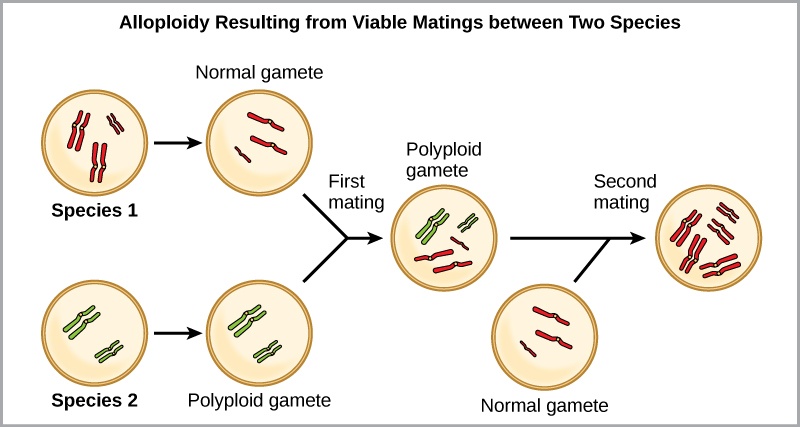 The cultivated forms of wheat, cotton, and tobacco plants are all allopolyploids. Although polyploidy occurs occasionally in animals, it takes place most commonly in plants. (Animals with any of the types of chromosomal aberrations described here are unlikely to survive and produce normal offspring.) Scientists have discovered more than half of all plant species studied relate back to a species evolved through polyploidy. With such a high rate of polyploidy in plants, some scientists hypothesize that this mechanism takes place more as an adaptation than as an error.