Biology » Evolution and Origin of Species » Reconnection and Rates of Speciation

Speciation occurs over a span of evolutionary time, so when a new species arises, there is a transition period during which the closely related species continue to interact.

After speciation, two species may recombine or even continue interacting indefinitely. Individual organisms will mate with any nearby individual who they are capable of breeding with. An area where two closely related species continue to interact and reproduce, forming hybrids, is called a hybrid zone. Over time, the hybrid zone may change depending on the fitness of the hybrids and the reproductive barriers (see the figure below). If the hybrids are less fit than the parents, reinforcement of speciation occurs, and the species continue to diverge until they can no longer mate and produce viable offspring. If reproductive barriers weaken, fusion occurs and the two species become one. Barriers remain the same if hybrids are fit and reproductive: stability may occur and hybridization continues. 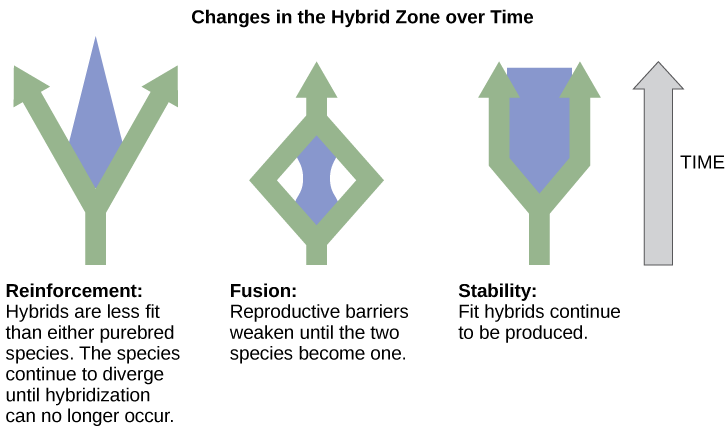 After speciation has occurred, the two separate but closely related species may continue to produce offspring in an area called the hybrid zone. Reinforcement, fusion, or stability may result, depending on reproductive barriers and the relative fitness of the hybrids.

If two species eat a different diet but one of the food sources is eliminated and both species are forced to eat the same foods, what change in the hybrid zone is most likely to occur?

Fusion is most likely to occur because the two species will interact more and similar traits in food acquisition will be selected.

Hybrids can be either less fit than the parents, more fit, or about the same. Usually hybrids tend to be less fit; therefore, such reproduction diminishes over time, nudging the two species to diverge further in a process called reinforcement. This term is used because the low success of the hybrids reinforces the original speciation. If the hybrids are as fit or more fit than the parents, the two species may fuse back into one species (see this figure from the next lesson). Scientists have also observed that sometimes two species will remain separate but also continue to interact to produce some hybrid individuals; this is classified as stability because no real net change is taking place.