Mutations are changes to an organism’s DNA and are an important driver of diversity in populations. Species evolve because of the accumulation of mutations that occur over time. The appearance of new mutations is the most common way to introduce novel genotypic and phenotypic variance. Some mutations are unfavorable or harmful and are quickly eliminated from the population by natural selection.

Others are beneficial and will spread through the population. Whether or not a mutation is beneficial or harmful is determined by whether it helps an organism survive to sexual maturity and reproduce. Some mutations do not do anything and can linger, unaffected by natural selection, in the genome. Some can have a dramatic effect on a gene and the resulting phenotype.

Mutations result from errors during DNA replication (especially during meiosis) or other types of damage to DNA (such as may be caused by exposure to radiation or carcinogens), which then may undergo error-prone repair (especially microhomology-mediated end joining), or cause an error during other forms of repair, or else may cause an error during replication (translesion synthesis). Mutations may also result from insertion or deletion of segments of DNA due to mobile genetic elements.

Mutations may or may not produce discernible changes in the observable characteristics (phenotype) of an organism. Mutations play a part in both normal and abnormal biological processes including: evolution, cancer, and the development of the immune system, including junctional diversity.

The genomes of RNA viruses are based on RNA rather than DNA. The RNA viral genome can be double stranded (as in DNA) or single stranded. In some of these viruses (such as the single stranded human immunodeficiency virus) replication occurs quickly and there are no mechanisms to check the genome for accuracy. This error-prone process often results in mutations. 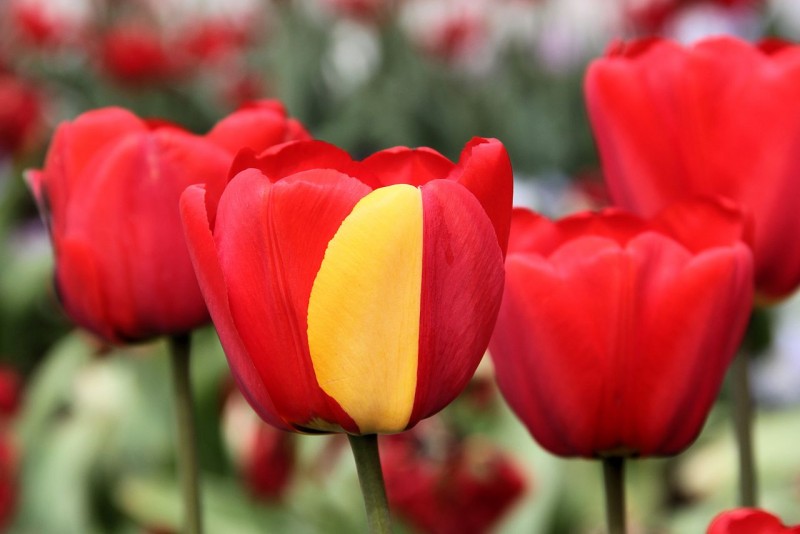 A tulip flower exhibiting a partially yellow petal because of a mutation in its genes. Credit: LepoRello, Wikimedia Commons, CC BY-SA 3.0

Mutation can result in many different types of change in sequences. Mutations in genes can either have no effect, alter the product of a gene, or prevent the gene from functioning properly or completely. Mutations can also occur in nongenic regions. One study on genetic variations between different species of Drosophila suggests that, if a mutation changes a protein produced by a gene, the result is likely to be harmful, with an estimated 70 percent of amino acid polymorphisms that have damaging effects, and the remainder being either neutral or marginally beneficial. Due to the damaging effects that mutations can have on genes, organisms have mechanisms such as DNA repair to prevent or correct mutations by reverting the mutated sequence back to its original state.

"Mutation", from Wikipedia the free Encyclopedia, CC BY 3.0