The theory of natural selection stems from the observation that some individuals in a population are more likely to survive longer and have more offspring than others; thus, they will pass on more of their genes to the next generation. A big, powerful male gorilla, for example, is much more likely than a smaller, weaker one to become the population’s silverback, the pack’s leader who mates far more than the other males of the group.

The pack leader will father more offspring, who share half of his genes, and are likely to also grow bigger and stronger like their father. Over time, the genes for bigger size will increase in frequency in the population, and the population will, as a result, grow larger on average. That is, this would occur if this particular selection pressure, or driving selective force, were the only one acting on the population. In other examples, better camouflage or a stronger resistance to drought might pose a selection pressure.

Another way a population’s allele and genotype frequencies can change is genetic drift (see the figure below), which is simply the effect of chance. By chance, some individuals will have more offspring than others—not due to an advantage conferred by some genetically-encoded trait, but just because one male happened to be in the right place at the right time (when the receptive female walked by) or because the other one happened to be in the wrong place at the wrong time (when a fox was hunting).

Genetic drift in a population can lead to the elimination of an allele from a population by chance. In this example, rabbits with the brown coat color allele (B) are dominant over rabbits with the white coat color allele (b). In the first generation, the two alleles occur with equal frequency in the population, resulting in p and q values of .5. Only half of the individuals reproduce, resulting in a second generation with p and q values of .7 and .3, respectively. Only two individuals in the second generation reproduce, and by chance these individuals are homozygous dominant for brown coat color. As a result, in the third generation the recessive b allele is lost.

Do you think genetic drift would happen more quickly on an island or on the mainland?

Genetic drift is likely to occur more rapidly on an island where smaller populations are expected to occur.

Genetic drift can also be magnified by natural events, such as a natural disaster that kills—at random—a large portion of the population. Known as the bottleneck effect, it results in a large portion of the genome suddenly being wiped out (see the figure below). In one fell swoop, the genetic structure of the survivors becomes the genetic structure of the entire population, which may be very different from the pre-disaster population. 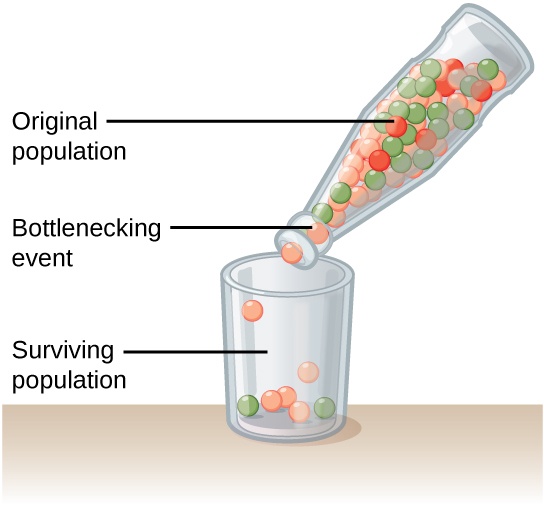 A chance event or catastrophe can reduce the genetic variability within a population.

Another scenario in which populations might experience a strong influence of genetic drift is if some portion of the population leaves to start a new population in a new location or if a population gets divided by a physical barrier of some kind. In this situation, those individuals are unlikely to be representative of the entire population, which results in the founder effect. The founder effect occurs when the genetic structure changes to match that of the new population’s founding fathers and mothers.

The founder effect is believed to have been a key factor in the genetic history of the Afrikaner population of Dutch settlers in South Africa, as evidenced by mutations that are common in Afrikaners but rare in most other populations. This is likely due to the fact that a higher-than-normal proportion of the founding colonists carried these mutations. As a result, the population expresses unusually high incidences of Huntington’s disease (HD) and Fanconi anemia (FA), a genetic disorder known to cause blood marrow and congenital abnormalities—even cancer.

Watch this short video to learn more about the founder and bottleneck effects.

Question: How do natural disasters affect the genetic structure of a population?

Background: When much of a population is suddenly wiped out by an earthquake or hurricane, the individuals that survive the event are usually a random sampling of the original group. As a result, the genetic makeup of the population can change dramatically. This phenomenon is known as the bottleneck effect.

Test the hypothesis: Count out the original population using different colored beads. For example, red, blue, and yellow beads might represent red, blue, and yellow individuals. After recording the number of each individual in the original population, place them all in a bottle with a narrow neck that will only allow a few beads out at a time. Then, pour 1/3 of the bottle’s contents into a bowl. This represents the surviving individuals after a natural disaster kills a majority of the population. Count the number of the different colored beads in the bowl, and record it. Then, place all of the beads back in the bottle and repeat the experiment four more times.

Form a conclusion: Most likely, the five resulting populations will differ quite dramatically. This is because natural disasters are not selective—they kill and spare individuals at random. Now think about how this might affect a real population. What happens when a hurricane hits the Mississippi Gulf Coast? How do the seabirds that live on the beach fare?