Genes are not the only players involved in determining population variation. Phenotypes are also influenced by other factors, such as the environment (see the figure below). A beachgoer is likely to have darker skin than a city dweller, for example, due to regular exposure to the sun, an environmental factor. Some major characteristics, such as sex, are determined by the environment for some species. For example, some turtles and other reptiles have temperature-dependent sex determination (TSD). TSD means that individuals develop into males if their eggs are incubated within a certain temperature range, or females at a different temperature range. 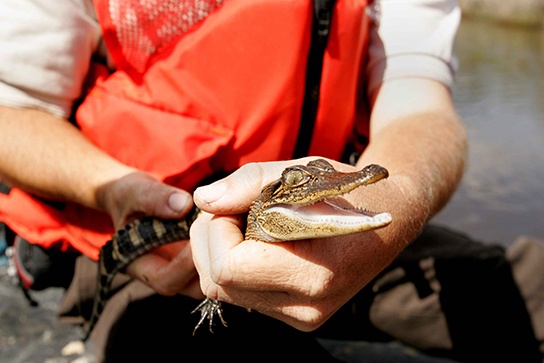 The sex of the American alligator (Alligator mississippiensis) is determined by the temperature at which the eggs are incubated. Eggs incubated at 30°C produce females, and eggs incubated at 33°C produce males. (credit: Steve Hillebrand, USFWS)

Geographic separation between populations can lead to differences in the phenotypic variation between those populations. Such geographical variation is seen between most populations and can be significant. One type of geographic variation, called a cline, can be seen as populations of a given species vary gradually across an ecological gradient. Species of warm-blooded animals, for example, tend to have larger bodies in the cooler climates closer to the earth’s poles, allowing them to better conserve heat. This is considered a latitudinal cline. Alternatively, flowering plants tend to bloom at different times depending on where they are along the slope of a mountain, known as an altitudinal cline.

If there is gene flow between the populations, the individuals will likely show gradual differences in phenotype along the cline. Restricted gene flow, on the other hand, can lead to abrupt differences, even speciation.