The energy required to remove the second most loosely bound electron is called the second ionization energy (IE2).

This can be explained because the energy of the subshells increases as l increases, due to penetration and shielding (as discussed previously in this chapter). Within any one shell, the s electrons are lower in energy than the p electrons. This means that an s electron is harder to remove from an atom than a p electron in the same shell. The electron removed during the ionization of beryllium ([He]2s2) is an s electron, whereas the electron removed during the ionization of boron ([He]2s22p1) is a p electron; this results in a lower first ionization energy for boron, even though its nuclear charge is greater by one proton. Thus, we see a small deviation from the predicted trend occurring each time a new subshell begins. 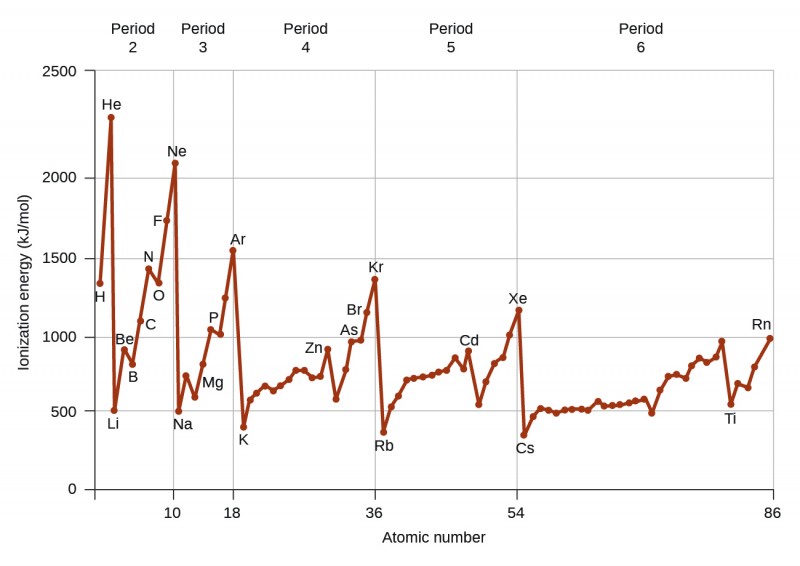 The first ionization energy of the elements in the first five periods are plotted against their atomic number.

This version of the periodic table shows the first ionization energy of (IE1), in kJ/mol, of selected elements.

Another deviation occurs as orbitals become more than one-half filled. The first ionization energy for oxygen is slightly less than that for nitrogen, despite the trend in increasing IE1 values across a period. Looking at the orbital diagram of oxygen, we can see that removing one electron will eliminate the electron–electron repulsion caused by pairing the electrons in the 2p orbital and will result in a half-filled orbital (which is energetically favorable). Analogous changes occur in succeeding periods (note the dip for sulfur after phosphorus in the figure above).

Predict the order of increasing energy for the following processes: IE1 for Al, IE1 for Tl, IE2 for Na, IE3 for Al.

This article has been modified from "Periodic Variations in Element Properties - Chemistry," by OpenStax, Prealgebra, CC BY 4.0. Download the article for free at http://cnx.org/contents/caa57dab-41c7-455e-bd6f-f443cda5519c@9.763.