The figure below illustrates the energy levels for various orbitals. The number before the orbital name (such as 2s, 3p, and so forth) stands for the principal quantum number, n. The letter in the orbital name defines the subshell with a specific angular momentum quantum number l = 0 for s orbitals, 1 for p orbitals, 2 for d orbitals. Finally, there are more than one possible orbitals for l ≥ 1, each corresponding to a specific value of ml. In the case of a hydrogen atom or a one-electron ion (such as He+, Li2+, and so on), energies of all the orbitals with the same n are the same. This is called a degeneracy, and the energy levels for the same principal quantum number, n, are called degenerate orbitals.

The chart shows the energies of electron orbitals in a multi-electron atom.

However, in atoms with more than one electron, this degeneracy is eliminated by the electron–electron interactions, and orbitals that belong to different subshells have different energies, as shown on the figure above. Orbitals within the same subshell (for example ns, np, nd, nf, such as 2p, 3s) are still degenerate and have the same energy.

While the three quantum numbers discussed in the previous paragraphs work well for describing electron orbitals, some experiments showed that they were not sufficient to explain all observed results. It was demonstrated in the 1920s that when hydrogen-line spectra are examined at extremely high resolution, some lines are actually not single peaks but, rather, pairs of closely spaced lines.

This is the so-called fine structure of the spectrum, and it implies that there are additional small differences in energies of electrons even when they are located in the same orbital. These observations led Samuel Goudsmit and George Uhlenbeck to propose that electrons have a fourth quantum number. They called this the spin quantum number, or ms.

The other three quantum numbers, n, l, and ml, are properties of specific atomic orbitals that also define in what part of the space an electron is most likely to be located. Orbitals are a result of solving the Schrödinger equation for electrons in atoms. The electron spin is a different kind of property. It is a completely quantum phenomenon with no analogues in the classical realm. In addition, it cannot be derived from solving the Schrödinger equation and is not related to the normal spatial coordinates (such as the Cartesian x, y, and z). Electron spin describes an intrinsic electron “rotation” or “spinning.” Each electron acts as a tiny magnet or a tiny rotating object with an angular momentum, even though this rotation cannot be observed in terms of the spatial coordinates. 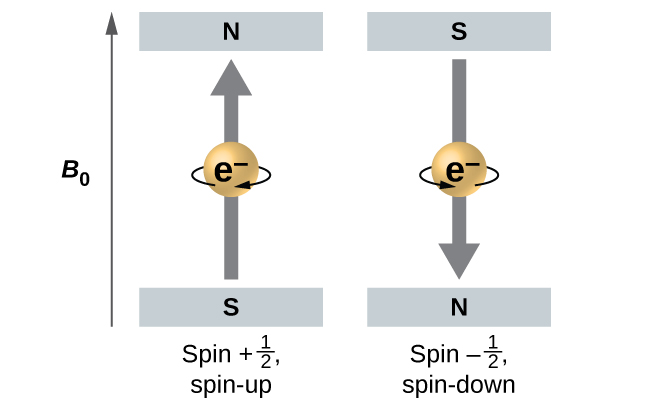 Electrons with spin values \(±\frac{1}{2}\) in an external magnetic field.

The figure above illustrates this phenomenon. An electron acts like a tiny magnet. Its moment is directed up (in the positive direction of the z axis) for the \(\frac{1}{2}\) spin quantum number and down (in the negative z direction) for the spin quantum number of .\(-\phantom{\rule{0.2em}{0ex}}\frac{1}{2}.\) A magnet has a lower energy if its magnetic moment is aligned with the external magnetic field (the left electron on the figure above) and a higher energy for the magnetic moment being opposite to the applied field.

This is why an electron with \({m}_{s}=\phantom{\rule{0.2em}{0ex}}\frac{1}{2}\) has a slightly lower energy in an external field in the positive z direction, and an electron with \({m}_{s}=-\frac{1}{2}\) has a slightly higher energy in the same field. This is true even for an electron occupying the same orbital in an atom. A spectral line corresponding to a transition for electrons from the same orbital but with different spin quantum numbers has two possible values of energy; thus, the line in the spectrum will show a fine structure splitting.

The tiny atoms that make up our world are made up of even tinier protons, neutrons and electrons. Though the number of protons determine an atom’s identity, it’s the electrons — specifically, their exact location outside the nucleus — that particularly perplex scientists. George Zaidan and Charles Morton show how to make an educated guess of where those itty-bitty freewheeling electrons might be.