The next paradox in the classical theory to be resolved concerned the photoelectric effect (see figure below). It had been observed that electrons could be ejected from the clean surface of a metal when light having a frequency greater than some threshold frequency was shone on it. Surprisingly, the kinetic energy of the ejected electrons did not depend on the brightness of the light, but increased with increasing frequency of the light.

Since the electrons in the metal had a certain amount of binding energy keeping them there, the incident light needed to have more energy to free the electrons. According to classical wave theory, a wave’s energy depends on its intensity (which depends on its amplitude), not its frequency. One part of these observations was that the number of electrons ejected within in a given time period was seen to increase as the brightness increased.

In 1905, Albert Einstein was able to resolve the paradox by incorporating Planck’s quantization findings into the discredited particle view of light (Einstein actually won his Nobel prize for this work, and not for his theories of relativity for which he is most famous).

Photons with low frequencies do not have enough energy to cause electrons to be ejected via the photoelectric effect. For any frequency of light above the threshold frequency, the kinetic energy of an ejected electron will increase linearly with the energy of the incoming photon. Image credit: OpenStax, Chemistry

Einstein argued that the quantized energies that Planck had postulated in his treatment of blackbody radiation could be applied to the light in the photoelectric effect so that the light striking the metal surface should not be viewed as a wave, but instead as a stream of particles (later called photons) whose energy depended on their frequency, according to Planck’s formula, \(E = hν \; (\)or, in terms of wavelength using \(c = νλ, E = \frac{hc}{λ}).\)

Electrons were ejected when hit by photons having sufficient energy (a frequency greater than the threshold). The greater the frequency, the greater the kinetic energy imparted to the escaping electrons by the collisions. Einstein also argued that the light intensity did not depend on the amplitude of the incoming wave, but instead corresponded to the number of photons striking the surface within a given time period.

With Einstein’s findings, the nature of light took on a new air of mystery. Although many light phenomena could be explained either in terms of waves or particles, certain phenomena, such as the interference patterns obtained when light passed through a double slit, were completely contrary to a particle view of light, while other phenomena, such as the photoelectric effect, were completely contrary to a wave view of light. Somehow, at a deep fundamental level still not fully understood, light is both wavelike and particle-like. This is known as wave-particle duality.

Calculating the Energy of Radiation 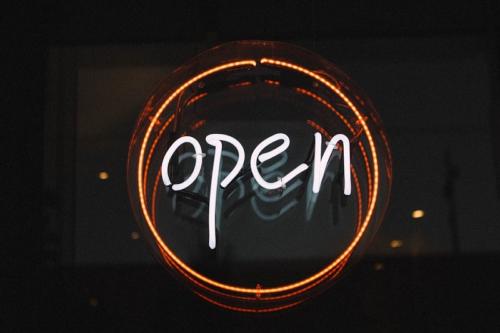 When we see light from a neon sign (see image above), we are observing radiation from excited neon atoms. If this radiation has a wavelength of 640 nm, what is the energy of the photon being emitted?

We use the part of Planck’s equation that includes the wavelength, λ, and convert units of nanometers to meters so that the units of λ and c are the same.

You can watch this video to see a simulation of the photoelectric effect showing how intensity, frequency, type of metal, and other factors influence the ejected photons.

Identify which of the following statements are false and, where necessary, change the italicized word or phrase to make them true, consistent with Einstein’s explanation of the photoelectric effect.

(a) Increasing the brightness of incoming light increases the kinetic energy of the ejected electrons.

(b) Increasing the wavelength of incoming light increases the kinetic energy of the ejected electrons.

(c) Increasing the brightness of incoming light increases the number of ejected electrons.

(d) Increasing the frequency of incoming light can increase the number of ejected electrons.

(d) True with regard to the threshold energy binding the electrons to the metal. Below this threshold, electrons are not emitted and above it they are. Once over the threshold value, further increasing the frequency does not increase the number of ejected electrons