EM radiation is classified into types according to the frequency of the wave: these types include, in order of increasing frequency, radio waves, microwaves, infrared radiation, visible light, ultraviolet radiation, X-rays and gamma rays.

The table below lists the wavelength and frequency ranges of the divisions of the electromagnetic spectrum.

Examples of some uses of electromagnetic waves are shown in the table below. 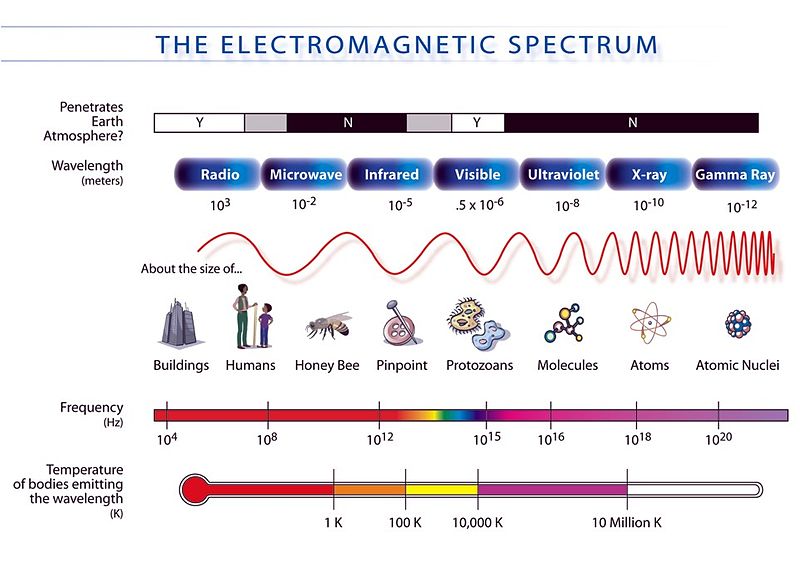 The electromagnetic spectrum as a function of frequency. The different types according to wavelength are shown as well as everyday comparisons.

EM radiation in the visible part of the spectrum is scattered off all of the objects around us. This EM radiation provides the information to our eyes that allows us to see. The frequencies of radiation the human eye is sensitive to constitute only a very small part of all possible frequencies of EM radiation. The full set of EM radiation is called the electromagnetic spectrum. To simplify things the EM spectrum divided into sections (such as radio, microwave, infrared, visible, ultraviolet, X-rays and gamma-rays).

This article has been modified from "Electromagnetic Spectrum, by Siyavula, Grade 10 Science, CC BY 4.0. Download the article for free at Siyavula.

This is a lesson from the tutorial, Introducing Electromagnetic Waves and you are encouraged to log in or register, so that you can track your progress.