Resistance is a measure of “how hard” it is to “push” electricity through a circuit element. Resistance can also apply to an entire circuit.

On a microscopic level, electrons moving through the conductor collide (or interact) with the particles of which the conductor (metal) is made. When they collide, they transfer kinetic energy. The electrons therefore lose kinetic energy and slow down. This leads to resistance. The transferred energy causes the resistor to heat up. You can feel this directly if you touch a cellphone charger when you are charging a cell phone – the charger gets warm because its circuits have some resistors in them! 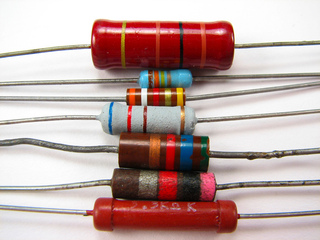 Photograph by oskay on Flickr.com

Resistance slows down the flow of charge in a circuit. The unit of resistance is the ohm (Ω) which is defined as a volt per ampere of current.

Fluorescent lightbulbs do not use thin wires; they use the fact that certain gases glow when a current flows through them. They are much more efficient (much less resistance) than lightbulbs. 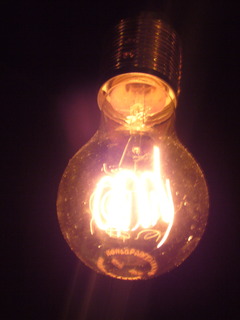 Photograph by clagnut on Flickr.com

All conductors have some resistance. For example, a piece of wire has less resistance than a light bulb, but both have resistance.

A lightbulb is a very thin wire surrounded by a glass housing The high resistance of the small wire (filament) in a lightbulb causes the electrons to transfer a lot of their kinetic energy in the form of heat. The heat energy is enough to cause the filament to glow white-hot which produces light.

The wires connecting the lamp to the cell or battery hardly even get warm while conducting the same amount of current. This is because of their much lower resistance due to their larger cross-section (they are thicker).

An important effect of a resistor is that it converts electrical energy into other forms of heat energy. Light energy is a by-product of the heat that is produced.

This article has been modified from "Resistance, by Siyavula, Grade 10 Science, CC BY 4.0. Download the article for free at Siyavula.

This is a lesson from the tutorial, Electric Circuits and you are encouraged to log in or register, so that you can track your progress.