Calculating the Price Elasticity of Supply

Calculating the Price Elasticity of Supply

Assume that an apartment rents for $650 per month and at that price 10,000 units are rented as shown in this figure. When the price increases to $700 per month, 13,000 units are supplied into the market. By what percentage does apartment supply increase? What is the price sensitivity? 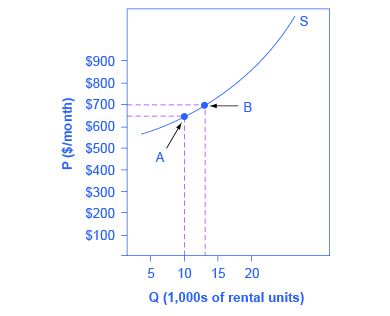 It is a common mistake to confuse the slope of either the supply or demand curve with its elasticity. The slope is the rate of change in units along the curve, or the rise/run (change in y over the change in x). For example, in this figure, each point shown on the demand curve, price drops by $10 and the number of units demanded increases by 200. So the slope is –10/200 along the entire demand curve and does not change. The price elasticity, however, changes along the curve. Elasticity between points A and B was 0.45 and increased to 1.47 between points G and H. Elasticity is the percentage change, which is a different calculation from the slope and has a different meaning.

As we move along the demand curve, the values for quantity and price go up or down, depending on which way we are moving, so the percentages for, say, a $1 difference in price or a one unit difference in quantity, will change as well, which means the ratios of those percentages will change.

This is a lesson from the tutorial, Elasticity and you are encouraged to log in or register, so that you can track your progress.