The term “food chain” is sometimes used metaphorically to describe human social situations. In this sense, food chains are thought of as a competition for survival, such as “who eats whom?” Someone eats and someone is eaten. Therefore, it is not surprising that in our competitive “dog-eat-dog” society, individuals who are considered successful are seen as being at the top of the food chain, consuming all others for their benefit, whereas the less successful are seen as being at the bottom.

The scientific understanding of a food chain is more precise than in its everyday usage. In ecology, a food chain is a linear sequence of organisms through which nutrients and energy pass: primary producers, primary consumers, and higher-level consumers are used to describe ecosystem structure and dynamics. There is a single path through the chain. Each organism in a food chain occupies what is called a trophic level. Depending on their role as producers or consumers, species or groups of species can be assigned to various trophic levels. 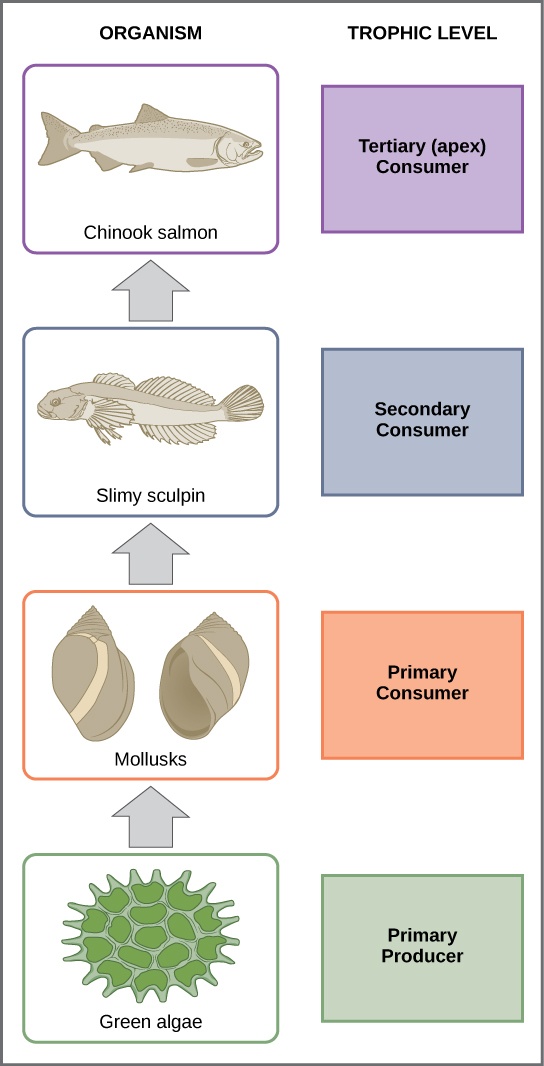 These are the trophic levels of a food chain in Lake Ontario at the United States-Canada border. Energy and nutrients flow from photosynthetic green algae at the bottom to the top of the food chain: the Chinook salmon.

One major factor that limits the length of food chains is energy. Energy is lost as heat between each trophic level due to the second law of thermodynamics. Thus, after a limited number of trophic energy transfers, the amount of energy remaining in the food chain may not be great enough to support viable populations at yet a higher trophic level. 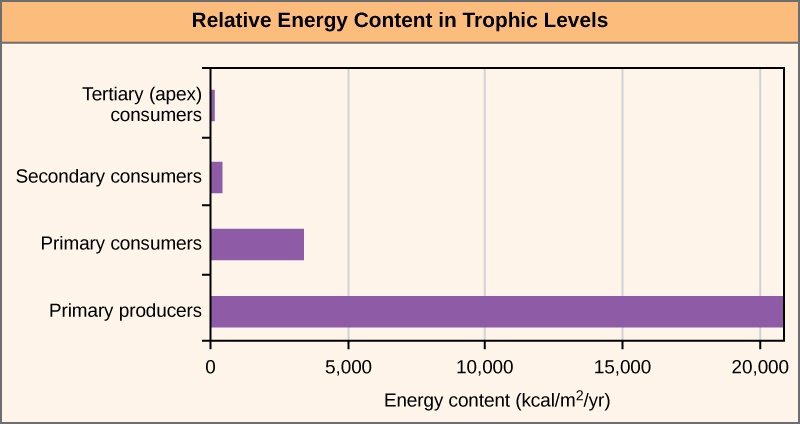 The relative energy in trophic levels in a Silver Springs, Florida, ecosystem is shown. Each trophic level has less energy available and supports fewer organisms at the next level.

There is a one problem when using food chains to accurately describe most ecosystems. Even when all organisms are grouped into appropriate trophic levels, some of these organisms can feed on species from more than one trophic level; likewise, some of these organisms can be eaten by species from multiple trophic levels. In other words, the linear model of ecosystems, the food chain, is not completely descriptive of ecosystem structure. A holistic model—which accounts for all the interactions between different species and their complex interconnected relationships with each other and with the environment—is a more accurate and descriptive model for ecosystems. A food web is a graphic representation of a holistic, non-linear web of primary producers, primary consumers, and higher-level consumers used to describe ecosystem structure and dynamics (see the figure below).

A comparison of the two types of structural ecosystem models shows strength in both. Food chains are more flexible for analytical modeling, are easier to follow, and are easier to experiment with, whereas food web models more accurately represent ecosystem structure and dynamics, and data can be directly used as input for simulation modeling.

Two general types of food webs are often shown interacting within a single ecosystem. A grazing food web (such as the Lake Ontario food web in the figure above) has plants or other photosynthetic organisms at its base, followed by herbivores and various carnivores. A detrital food web consists of a base of organisms that feed on decaying organic matter (dead organisms), called decomposers or detritivores. These organisms are usually bacteria or fungi that recycle organic material back into the biotic part of the ecosystem as they themselves are consumed by other organisms. As all ecosystems require a method to recycle material from dead organisms, most grazing food webs have an associated detrital food web. For example, in a meadow ecosystem, plants may support a grazing food web of different organisms, primary and other levels of consumers, while at the same time supporting a detrital food web of bacteria, fungi, and detrivorous invertebrates feeding off dead plants and animals.

The three-spines stickleback (Gasterosteus aculeatus) is a freshwater fish that evolved from a saltwater fish to live in freshwater lakes about 10,000 years ago, which is considered a recent development in evolutionary time (see the figure below). Over the last 10,000 years, these freshwater fish then became isolated from each other in different lakes. Depending on which lake population was studied, findings showed that these sticklebacks then either remained as one species or evolved into two species. The divergence of species was made possible by their use of different areas of the pond for feeding called micro niches.

Dr. Harmon and his team created artificial pond microcosms in 250-gallon tanks and added muck from freshwater ponds as a source of zooplankton and other invertebrates to sustain the fish. In different experimental tanks they introduced one species of stickleback from either a single-species or double-species lake.

Over time, the team observed that some of the tanks bloomed with algae while others did not. This puzzled the scientists, and they decided to measure the water’s dissolved organic carbon (DOC), which consists of mostly large molecules of decaying organic matter that give pond-water its slightly brownish color. It turned out that the water from the tanks with two-species fish contained larger particles of DOC (and hence darker water) than water with single-species fish. This increase in DOC blocked the sunlight and prevented algal blooming. Conversely, the water from the single-species tank contained smaller DOC particles, allowing more sunlight penetration to fuel the algal blooms.

This change in the environment, which is due to the different feeding habits of the stickleback species in each lake type, probably has a great impact on the survival of other species in these ecosystems, especially other photosynthetic organisms. Thus, the study shows that, at least in these ecosystems, the environment and the evolution of populations have reciprocal effects that may now be factored into simulation models. 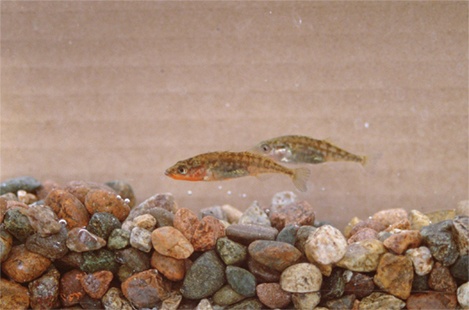 This is a lesson from the tutorial, Ecosystems and you are encouraged to log in or register, so that you can track your progress.