Why are pyramids important in ecology?

The classic example of a pyramid is shown here. But the pyramid structure can also represent the decrease in a measured substance from the lowest level on up. In ecology, pyramids model the use of energy from the producers through the ecosystem.

Energy is passed up a food chain or web from lower to higher trophic levels. However, generally only about 10 percent of the energy at one level is available to the next level. This is represented by the ecological pyramid in the figure below. What happens to the other 90 percent of energy? It is used for metabolic processes or given off to the environment as heat. This loss of energy explains why there are rarely more than four trophic levels in a food chain or web. Sometimes there may be a fifth trophic level, but usually there’s not enough energy left to support any additional levels. 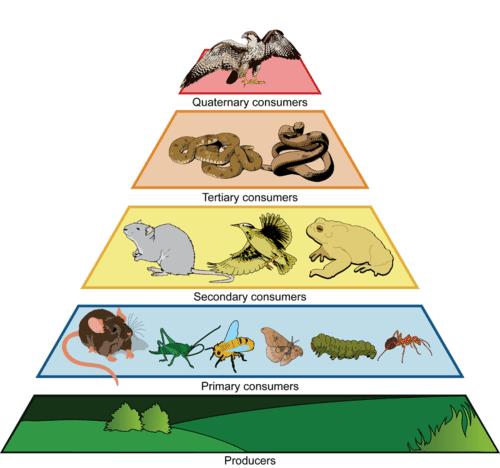 Ecological Pyramid. This pyramid shows how energy and biomass decrease from lower to higher trophic levels. Assume that producers in this pyramid have 1,000,000 kilocalories of energy. How much energy is available to primary consumers?

Ecological pyramids can demonstrate the decrease in energy, biomass or numbers within an ecosystem.