Is this any way to live?

It is if you’re a penguin. This population of penguins is made of all the individuals of the same species of penguins who live together. They seem to exist in a very crowded – or densely populated – environment, and in a random configuration.

Communities are made up of populations of different species. In biology, a population is a group of organisms of the same species that live in the same area. The population is  natural selection and evolution. How large a population is and how fast it is growing are often used as measures of its health.

Population size is the number of individuals in a population. For example, a population of insects might consist of 100 individual insects, or many more. Population size influences the chances of a species surviving or going extinct. Generally, very small populations are at greatest risk of extinction. However, the size of a population may be less important than its density.

Population density just represents the average number of individuals per unit of area or volume. Often, individuals in a population are not spread out evenly. Instead, they may live in clumps or some other pattern (see the figure below). The pattern may reflect characteristics of the species or its environment. Population distribution describes how the individuals are distributed, or spread throughout their habitat. 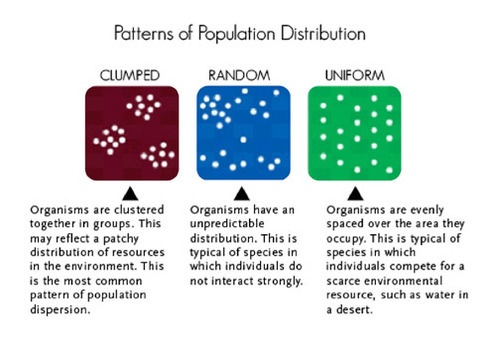 Patterns of Population Distribution. What factors influence the pattern of a population over space?