What starts out very small and has the potential to grow considerably larger?

Trees, of course. But also populations. Give a population everything it needs to survive, and the growth of that population will be tremendous.

Populations may show different patterns of growth. The growth pattern depends partly on the conditions under which a population lives.

Under ideal conditions, populations of most species can grow at exponential rates. Curve A in the figure below represents exponential growth. The population starts out growing slowly. As population size increases, the growth rate also increases. The larger the population becomes, the faster it grows. 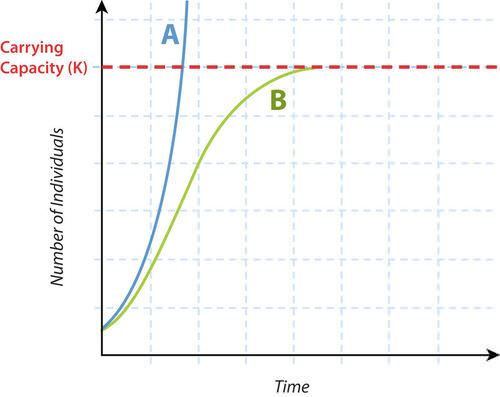 Most populations do not live under ideal conditions. Therefore, most do not grow exponentially. Certainly, no population can keep growing exponentially for very long. Many factors may limit growth. Often, the factors are density dependent (known as density-dependent factors). These are factors that are influential when the population becomes too large and crowded. For example, the population may start to run out of food or be poisoned by its own wastes. As a result, population growth slows and population size levels off. Curve B in the figure above represents this pattern of growth, which is called logistic growth.

Species can be divided into two basic types when it comes to how their populations grow.