Legumes. Legume plants have the ability to fix atmospheric nitrogen, due to a mutualistic symbiotic relationship with bacteria found in root nodules of these plants.

Nitrogen makes up 78 percent of Earth’s atmosphere. It’s also an important part of living things. Nitrogen is found in proteins, nucleic acids, and chlorophyll. The nitrogen cycle moves nitrogen through the abiotic and biotic parts of ecosystems. the figure below shows how nitrogen cycles through a terrestrial ecosystem. Nitrogen passes through a similar cycle in aquatic ecosystems. 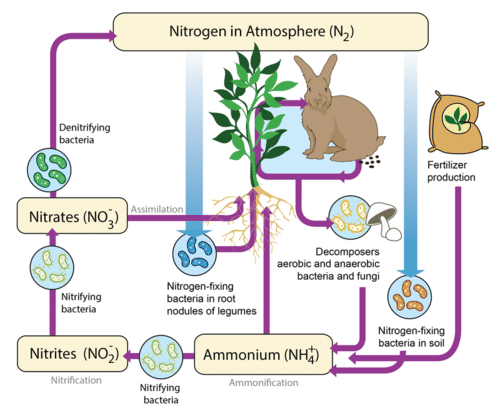 Nitrogen Cycle in a Terrestrial Ecosystem. Nitrogen cycles between the atmosphere and living things.

Even though nitrogen gas makes up most of Earth’s atmosphere, plants cannot use this nitrogen gas to make organic compounds for themselves and other organisms. The two nitrogen atoms in a molecule of nitrogen gas are held together by a very stable triple bond. This bond must be broken for the nitrogen to be used. The nitrogen gas must be changed to a form called nitrates, which plants can absorb through their roots. The process of changing nitrogen gas to nitrates is called nitrogen fixation. It is carried out by nitrogen-fixing bacteria. The bacteria live in soil and roots of legumes, such as peas.

When plants and other organisms die, decomposers break down their remains. In the process, they release nitrogen in the form of ammonium ions. This process is called ammonification. Nitrifying bacteria change the ammonium ions into nitrites and nitrates. Some of the nitrates are used by plants. The process of converting ammonium ions to nitrites or nitrates is called nitrification. Still other bacteria, called denitrifying bacteria, convert some of the nitrates in soil back into nitrogen gas in a process called denitrification. The process is the opposite of nitrogen fixation. Denitrification returns nitrogen gas back to the atmosphere, where it can continue the nitrogen cycle.