Not necessarily. The growth of a population depends on a number of issues. Obviously, the average age of the individuals of that population is important. But other factors, such as the local economy, also play a role.

For all these reasons, death rates fell, especially in children. This allowed many more children to survive to adulthood, so birth rates increased. As the gap between birth and death rates widened, the human population grew faster.

It wasn’t long before birth rates started to fall as well in Europe and North America. People started having fewer children because large families were no longer beneficial for several reasons.

Stages of the Demographic Transition

These changes in population that occurred in Europe and North America have been called the demographic transition. The transition can be summarized in the following four stages, which are illustrated in the figure below: 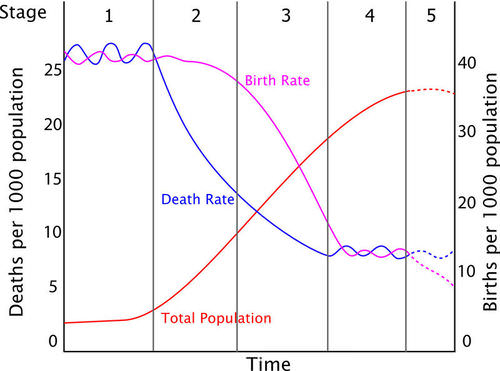 Stages of the Demographic Transition. In the demographic transition, the death rate falls first. After a lag, the birth rate also falls. How do these changes affect the rate of population growth over time?