Does there have to be a winner?

When animals compete? Yes. Animals, or other organisms, will compete when both want the same thing. One must “lose” so the winner can have the resource. But competition doesn’t necessarily involve physical altercations.

Competition is a relationship between organisms that strive for the same resources in the same place. The resources might be food, water, or space. There are two different types of competition:

Interspecific competition often leads to extinction. The species that is less well adapted may get fewer of the resources that both species need. As a result, members of that species are less likely to survive, and the species may go extinct.

Instead of extinction, interspecific competition may lead to greater specialization. Specialization occurs when competing species evolve different adaptations. For example, they may evolve adaptations that allow them to use different food sources. the figure below describes an example. 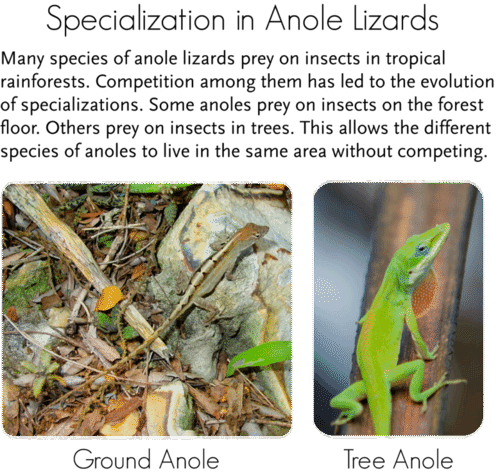 Watch the beginning of the following video to learn more about competition.