How could releasing this much pollution into the atmosphere not be a poor idea?

Flowing water can slowly dissolve carbon in sedimentary rock. Most of this carbon ends up in the ocean. The deep ocean can store carbon for thousands of years or more. Sedimentary rock and the ocean are major reservoirs of stored carbon. Carbon is also stored for varying lengths of time in the atmosphere, in living organisms, and as fossil fuel deposits. These are all parts of the carbon cycle, which is shown in the figure below. 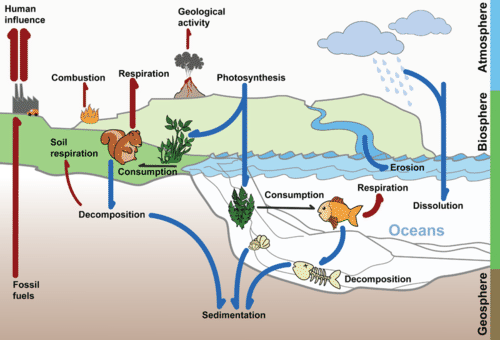 The Carbon Cycle. Carbon moves from one reservoir to another in the carbon cycle. What role do organisms play in this cycle?

Why is recycling carbon important? Recall that carbon is the cornerstone of organic compounds, the compounds necessary for life. But do organisms make their own carbon? Do they have the genes that encode proteins necessary to make carbon? No. In fact, there are no such genes. Carbon must be recycled from other living organisms, from carbon in the atmosphere, and from carbon in other parts of the biosphere.

Carbon in the Atmosphere

Though carbon can be found in ocean water, rocks and sediment and other parts of the biosphere, the atmosphere may be the most recognizable reservoir of carbon. Carbon occurs in various forms in different parts of the carbon cycle. Some of the different forms in which carbon appears are described in Table below. KEY: C = Carbon, O = Oxygen, H = Hydrogen