Temperate forests are the most common biome in eastern North America, Western Europe, Eastern Asia, Chile, and New Zealand (see the figure below). This biome is found throughout mid-latitude regions. Temperatures range between -30 °C and 30 °C (-22 °F to 86 °F) and drop to below freezing on an annual basis. These temperatures mean that temperate forests have defined growing seasons during the spring, summer, and early fall. Precipitation is relatively constant throughout the year and ranges between 75 cm and 150 cm (29.5–59 in).

Because of the moderate annual rainfall and temperatures, deciduous trees are the dominant plant in this biome (see the figure below). Deciduous trees lose their leaves each fall and remain leafless in the winter. Thus, no photosynthesis occurs in the deciduous trees during the dormant winter period. Each spring, new leaves appear as the temperature increases. Because of the dormant period, the net primary productivity of temperate forests is less than that of tropical wet forests. In addition, temperate forests show less diversity of tree species than tropical wet forest biomes. 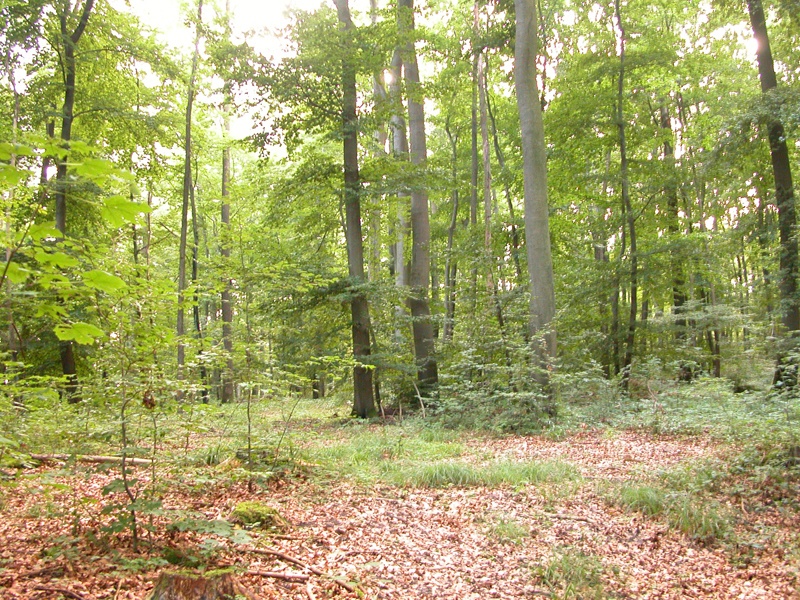 Deciduous trees are the dominant plant in the temperate forest. (credit: Oliver Herold)

The trees of the temperate forests leaf out and shade much of the ground; however, this biome is more open than tropical wet forests because trees in the temperate forests do not grow as tall as the trees in tropical wet forests. The soils of the temperate forests are rich in inorganic and organic nutrients. This is due to the thick layer of leaf litter on forest floors. As this leaf litter decays, nutrients are returned to the soil. The leaf litter also protects soil from erosion, insulates the ground, and provides habitats for invertebrates (such as the pill bug or roly-poly, Armadillidium vulgare) and their predators, such as the red-backed salamander (Plethodon cinereus).