Subtropical deserts exist between 15 ° and 30 ° north and south latitude and are centered on the Tropics of Cancer and Capricorn (see the figure below). This biome is very dry; in some years, evaporation exceeds precipitation. Subtropical hot deserts can have daytime soil surface temperatures above 60 °C (140 °F) and nighttime temperatures approaching 0 °C (32 °F). In cold deserts, temperatures can be as high as 25 °C and can drop below -30 °C (-22 °F). Subtropical deserts are characterized by low annual precipitation of fewer than 30 cm (12 in) with little monthly variation and lack of predictability in rainfall. In some cases, the annual rainfall can be as low as 2 cm (0.8 in) in subtropical deserts located in central Australia (“the Outback”) and northern Africa.

The vegetation and low animal diversity of this biome is closely related to this low and unpredictable precipitation. Very dry deserts lack perennial vegetation that lives from one year to the next; instead, many plants are annuals that grow quickly and reproduce when rainfall does occur, then they die. Many other plants in these areas are characterized by having a number of adaptations that conserve water, such as deep roots, reduced foliage, and water-storing stems (see the figure below). Seed plants in the desert produce seeds that can be in dormancy for extended periods between rains. Adaptations in desert animals include nocturnal behavior and burrowing. 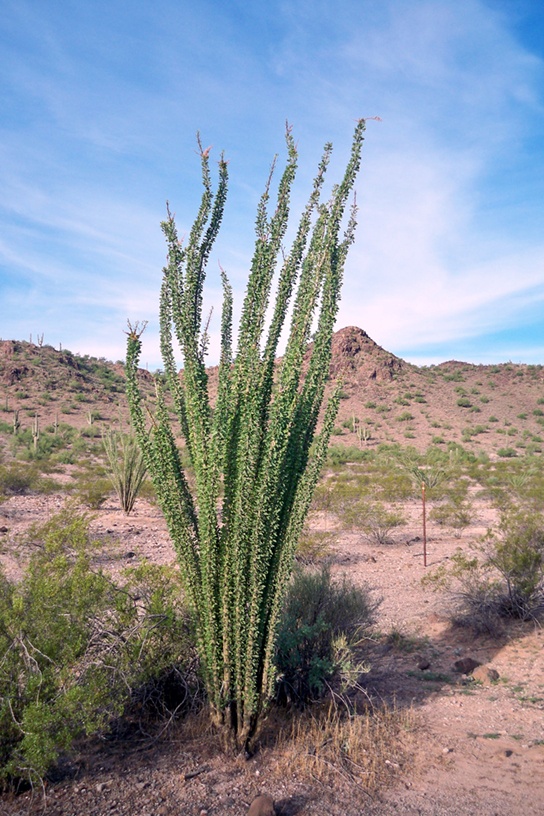 To reduce water loss, many desert plants have tiny leaves or no leaves at all. The leaves of ocotillo (Fouquieria splendens), shown here in the Sonora Desert near Gila Bend, Arizona, appear only after rainfall, and then are shed.