Each nucleotide is made up of a sugar, a phosphate group, and a nitrogenous base. The sugar is deoxyribose in DNA and ribose in RNA.

The nucleotides combine with each other by covalent bonds known as phosphodiester bonds or linkages. The purines have a double ring structure with a six-membered ring fused to a five-membered ring. Pyrimidines are smaller in size; they have a single six-membered ring structure. The carbon atoms of the five-carbon sugar are numbered 1′, 2′, 3′, 4′, and 5′ (1′ is read as “one prime”). The phosphate residue is attached to the hydroxyl group of the 5′ carbon of one sugar of one nucleotide and the hydroxyl group of the 3′ carbon of the sugar of the next nucleotide, thereby forming a 5′-3′ phosphodiester bond.

In the 1950s, Francis Crick and James Watson worked together to determine the structure of DNA at the University of Cambridge, England. Other scientists like Linus Pauling and Maurice Wilkins were also actively exploring this field. Pauling had discovered the secondary structure of proteins using X-ray crystallography. In Wilkins’ lab, researcher Rosalind Franklin was using X-ray diffraction methods to understand the structure of DNA.

Watson and Crick were able to piece together the puzzle of the DNA molecule on the basis of Franklin’s data because Crick had also studied X-ray diffraction (see the figure below). In 1962, James Watson, Francis Crick, and Maurice Wilkins were awarded the Nobel Prize in Medicine. Unfortunately, by then Franklin had died, and Nobel prizes are not awarded posthumously. 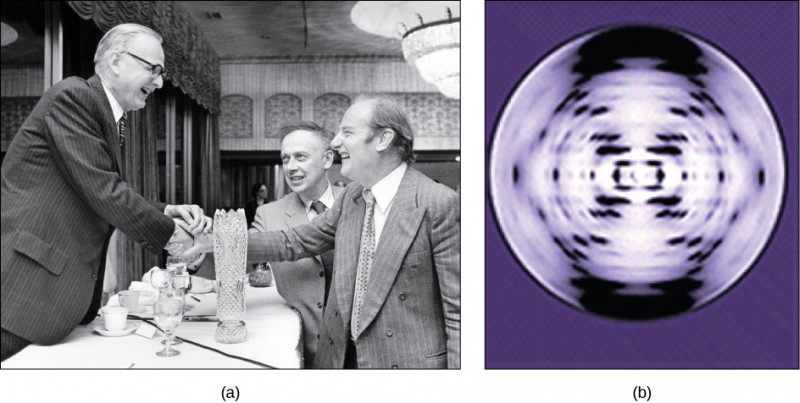 The work of pioneering scientists (a) James Watson, Francis Crick, and Maclyn McCarty led to our present day understanding of DNA. Scientist Rosalind Franklin discovered (b) the X-ray diffraction pattern of DNA, which helped to elucidate its double helix structure. (credit a: modification of work by Marjorie McCarty, Public Library of Science)

The base pairs are stabilized by hydrogen bonds; adenine and thymine form two hydrogen bonds and cytosine and guanine form three hydrogen bonds. The two strands are anti-parallel in nature; that is, the 3′ end of one strand faces the 5′ end of the other strand. The sugar and phosphate of the nucleotides form the backbone of the structure, whereas the nitrogenous bases are stacked inside. Each base pair is separated from the other base pair by a distance of 0.34 nm, and each turn of the helix measures 3.4 nm.

Therefore, ten base pairs are present per turn of the helix. The diameter of the DNA double helix is 2 nm, and it is uniform throughout. Only the pairing between a purine and pyrimidine can explain the uniform diameter. The twisting of the two strands around each other results in the formation of uniformly spaced major and minor grooves (see the figure below).

DNA has (a) a double helix structure and (b) phosphodiester bonds. The (c) major and minor grooves are binding sites for DNA binding proteins during processes such as transcription (the copying of RNA from DNA) and replication.