Other Factors That Affect Supply

Other Factors That Affect Supply

The cost of production for many agricultural products will be affected by changes in natural conditions. For example, in 2014 the Manchurian Plain in Northeastern China, which produces most of the country’s wheat, corn, and soybeans, experienced its most severe drought in 50 years. A drought decreases the supply of agricultural products, which means that at any given price, a lower quantity will be supplied; conversely, especially good weather would shift the supply curve to the right.

When a firm discovers a new technology that allows the firm to produce at a lower cost, the supply curve will shift to the right, as well. For instance, in the 1960s a major scientific effort nicknamed the Green Revolution focused on breeding improved seeds for basic crops like wheat and rice. By the early 1990s, more than two-thirds of the wheat and rice in low-income countries around the world was grown with these Green Revolution seeds—and the harvest was twice as high per acre. A technological improvement that reduces costs of production will shift supply to the right, so that a greater quantity will be produced at any given price.

Government policies can affect the cost of production and the supply curve through taxes, regulations, and subsidies. For example, the U.S. government imposes a tax on alcoholic beverages that collects about $8 billion per year from producers. Taxes are treated as costs by businesses. Higher costs decrease supply for the reasons discussed above. Other examples of policy that can affect cost are the wide array of government regulations that require firms to spend money to provide a cleaner environment or a safer workplace; complying with regulations increases costs.

A government subsidy, on the other hand, is the opposite of a tax. A subsidy occurs when the government pays a firm directly or reduces the firm’s taxes if the firm carries out certain actions. From the firm’s perspective, taxes or regulations are an additional cost of production that shifts supply to the left, leading the firm to produce a lower quantity at every given price. Government subsidies reduce the cost of production and increase supply at every given price, shifting supply to the right. The following Work It Out feature shows how this shift happens.

We know that a supply curve shows the minimum price a firm will accept to produce a given quantity of output. What happens to the supply curve when the cost of production goes up? Following is an example of a shift in supply due to a production cost increase.

Step 1. Draw a graph of a supply curve for pizza. Pick a quantity (like Q0). If you draw a vertical line up from Q0 to the supply curve, you will see the price the firm chooses. An example is shown in this figure. 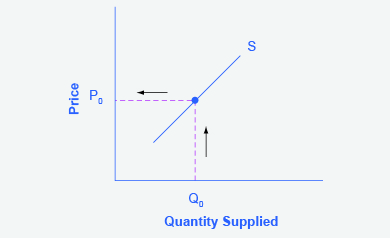 The supply curve can be used to show the minimum price a firm will accept to produce a given quantity of output.

Step 2. Why did the firm choose that price and not some other? One way to think about this is that the price is composed of two parts. The first part is the cost of producing pizzas at the margin; in this case, the cost of producing the pizza, including cost of ingredients (dough, sauce, cheese, pepperoni, and so on), the cost of the pizza oven, the rent on the shop, and the wages of the workers. The second part is the firm’s desired profit, which is determined, among other factors, by the profit margins in that particular business. If you add these two parts together, you get the price the firm wishes to charge. The quantity Q0 and associated price P0 give you one point on the firm’s supply curve, as shown in this figure. 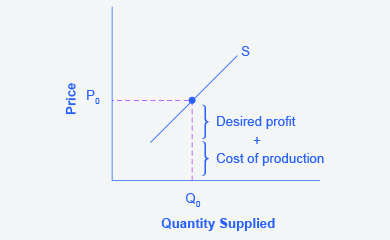 The cost of production and the desired profit equal the price a firm will set for a product.

Step 3. Now, suppose that the cost of production goes up. Perhaps cheese has become more expensive by $0.75 per pizza. If that is true, the firm will want to raise its price by the amount of the increase in cost ($0.75). Draw this point on the supply curve directly above the initial point on the curve, but $0.75 higher, as shown in this figure. 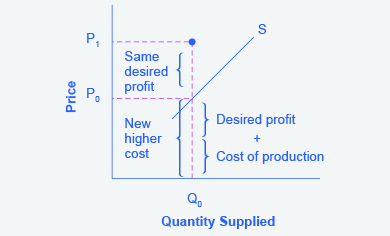 Step 4. Shift the supply curve through this point. You will see that an increase in cost causes an upward (or a leftward) shift of the supply curve so that at any price, the quantities supplied will be smaller, as shown in this figure. 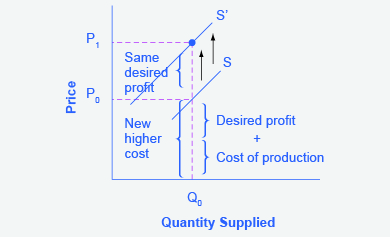 When the cost of production increases, the supply curve shifts upwardly to a new price level.