Economics » Demand and Supply » Changes in Equilibrium Price and Quantity: The Four-Step Process

The U.S. Postal Service is facing difficult challenges. Compensation for postal workers tends to increase most years due to cost-of-living increases. At the same time, more and more people are using email, text, and other digital message forms such as Facebook and Twitter to communicate with friends and others. What does this suggest about the continued viability of the Postal Service? This figure and the text below illustrates using the four-step analysis to answer this question. 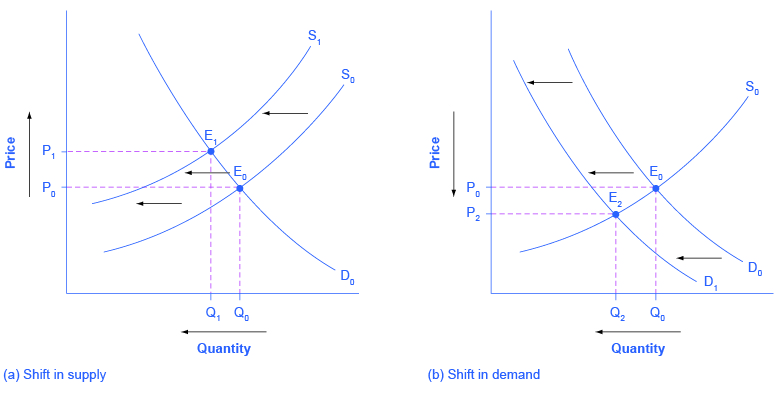 Figure (a) shows the shift in supply discussed in the following steps.

Step 1. Draw a demand and supply model to illustrate what the market for the U.S. Postal Service looked like before this scenario starts. The demand curve D0 and the supply curve S0 show the original relationships.

Step 2. Did the change described affect supply or demand? Labor compensation is a cost of production. A change in production costs caused a change in supply for the Postal Service.

Step 3. Was the effect on supply positive or negative? Higher labor compensation leads to a lower quantity supplied of postal services at every given price, causing the supply curve for postal services to shift to the left, from S0 to S1.

Figure (b) shows the shift in demand discussed in the following steps.

Step 1. Draw a demand and supply model to illustrate what the market for U.S. Postal Services looked like before this scenario starts. The demand curve D0 and the supply curve S0 show the original relationships. Note that this diagram is independent from the diagram in panel (a).

Step 2. Did the change described affect supply or demand? A change in tastes away from snailmail toward digital messages will cause a change in demand for the Postal Service.

Step 3. Was the effect on demand positive or negative? A change in tastes away from snailmail toward digital messages causes lower quantity demanded of postal services at every given price, causing the demand curve for postal services to shift to the left, from D0 to D1.

The final step in a scenario where both supply and demand shift is to combine the two individual analyses to determine what happens to the equilibrium quantity and price. Graphically, we superimpose the previous two diagrams one on top of the other, as in this figure. 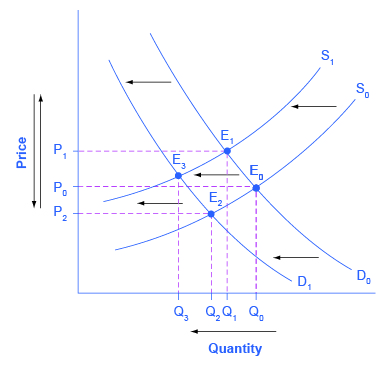 Supply and demand shifts cause changes in equilibrium price and quantity.

Following are the results:

The next subsection focuses on the difference between shifts of supply or demand and movements along a curve.

One common mistake in applying the demand and supply framework is to confuse the shift of a demand or a supply curve with movement along a demand or supply curve. As an example, consider a problem that asks whether a drought will increase or decrease the equilibrium quantity and equilibrium price of wheat. Lee, a student in an introductory economics class, might reason: 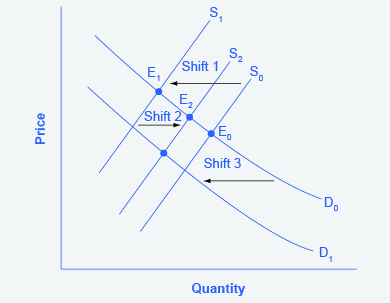 At about this point, Lee suspects that this answer is headed down the wrong path. Think about what might be wrong with Lee’s logic, and then read the answer that follows.

Think carefully about the timeline of events: What happens first, what happens next? What is cause, what is effect? If you keep the order right, you are more likely to get the analysis correct.