The core threat to biodiversity on the planet, and therefore a threat to human welfare, is the combination of human population growth and resource exploitation. The human population requires resources to survive and grow, and those resources are being removed unsustainably from the environment. The three greatest proximate threats to biodiversity are habitat loss, overharvesting, and introduction of exotic species.

The first two of these are a direct result of human population growth and resource use. The third results from increased mobility and trade. A fourth major cause of extinction, anthropogenic climate change, has not yet had a large impact, but it is predicted to become significant during this century. Global climate change is also a consequence of human population needs for energy and the use of fossil fuels to meet those needs (see the figure below). Environmental issues, such as toxic pollution, have specific targeted effects on species, but they are not generally seen as threats at the magnitude of the others. 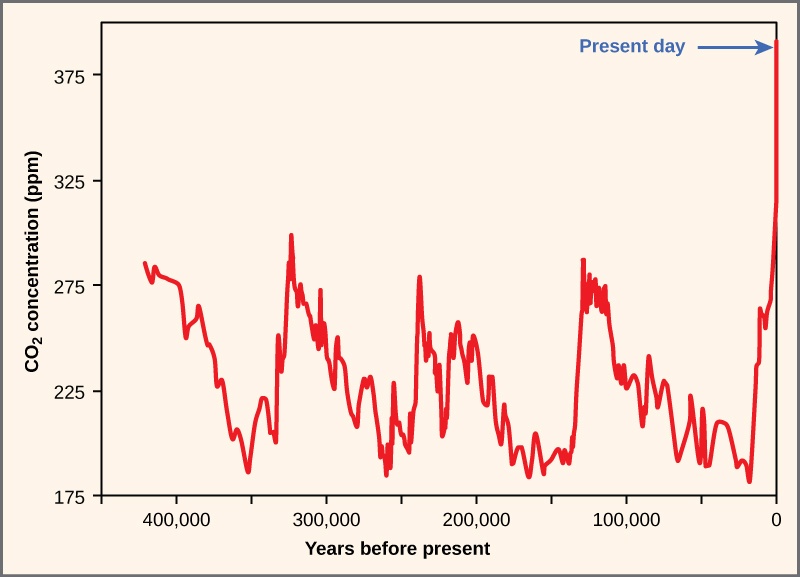 Atmospheric carbon dioxide levels fluctuate in a cyclical manner. However, the burning of fossil fuels in recent history has caused a dramatic increase in the levels of carbon dioxide in the Earth’s atmosphere, which have now reached levels never before seen in human history. Scientists predict that the addition of this “greenhouse gas” to the atmosphere is resulting in climate change that will significantly impact biodiversity in the coming century.