Exotic species are species that have been intentionally or unintentionally introduced by humans into an ecosystem in which they did not evolve. Such introductions likely occur frequently as natural phenomena. For example, Kudzu (Pueraria lobata), which is native to Japan, was introduced in the United States in 1876. It was later planted for soil conservation. Problematically, it grows too well in the southeastern United States—up to a foot a day. It is now a pest species and covers over 7 million acres in the southeastern United States. If an introduced species is able to survive in its new habitat, that introduction is now reflected in the observed range of the species. Human transportation of people and goods, including the intentional transport of organisms for trade, has dramatically increased the introduction of species into new ecosystems, sometimes at distances that are well beyond the capacity of the species to ever travel itself and outside the range of the species’ natural predators.

Most exotic species introductions probably fail because of the low number of individuals introduced or poor adaptation to the ecosystem they enter. Some species, however, possess preadaptations that can make them especially successful in a new ecosystem. These exotic species often undergo dramatic population increases in their new habitat and reset the ecological conditions in the new environment, threatening the species that exist there. For this reason, exotic species are also called invasive species. Exotic species can threaten other species through competition for resources, predation, or disease.

Explore an interactive global database of exotic or invasive species.

Lakes and islands are particularly vulnerable to extinction threats from introduced species. In Lake Victoria, as mentioned earlier, the intentional introduction of the Nile perch was largely responsible for the extinction of about 200 species of cichlids. The accidental introduction of the brown tree snake via aircraft (see the figure below) from the Solomon Islands to Guam in 1950 has led to the extinction of three species of birds and three to five species of reptiles endemic to the island. Several other species are still threatened. The brown tree snake is adept at exploiting human transportation as a means to migrate; one was even found on an aircraft arriving in Corpus Christi, Texas. Constant vigilance on the part of airport, military, and commercial aircraft personnel is required to prevent the snake from moving from Guam to other islands in the Pacific, especially Hawaii. Islands do not make up a large area of land on the globe, but they do contain a disproportionate number of endemic species because of their isolation from mainland ancestors. 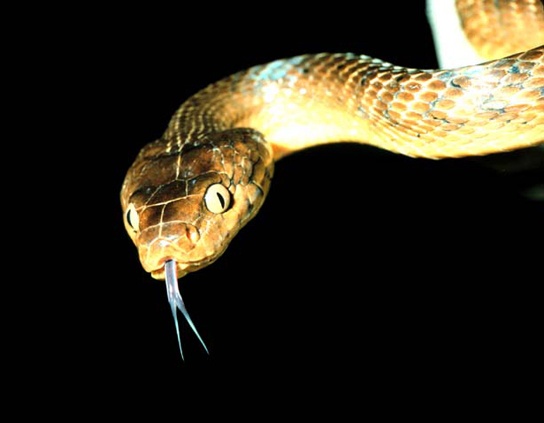 The brown tree snake, Boiga irregularis, is an exotic species that has caused numerous extinctions on the island of Guam since its accidental introduction in 1950. (credit: NPS)

It now appears that the global decline in amphibian species recognized in the 1990s is, in some part, caused by the fungus Batrachochytrium dendrobatidis, which causes the disease chytridiomycosis (see the figure below). There is evidence that the fungus is native to Africa and may have been spread throughout the world by transport of a commonly used laboratory and pet species: the African clawed toad (Xenopus laevis). It may well be that biologists themselves are responsible for spreading this disease worldwide. The North American bullfrog, Rana catesbeiana, which has also been widely introduced as a food animal but which easily escapes captivity, survives most infections of Batrachochytriumdendrobatidis and can act as a reservoir for the disease. 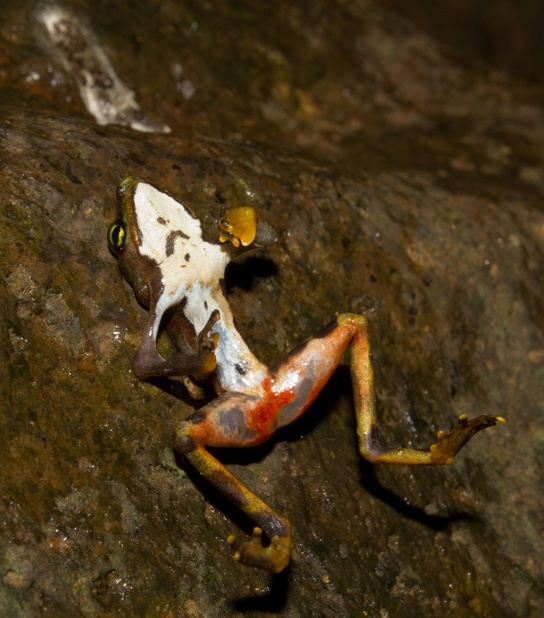 This Limosa Harlequin Frog (Atelopus limosus), an endangered species from Panama, died from a fungal disease called chytridiomycosis. The red lesions are symptomatic of the disease. (credit: Brian Gratwicke)

Early evidence suggests that another fungal pathogen, Geomyces destructans, introduced from Europe is responsible for white-nose syndrome, which infects cave-hibernating bats in eastern North America and has spread from a point of origin in western New York State (see the figure below). The disease has decimated bat populations and threatens extinction of species already listed as endangered: the Indiana bat, Myotis sodalis, and potentially the Virginia big-eared bat, Corynorhinus townsendii virginianus. How the fungus was introduced is unclear, but one logical presumption would be that recreational cavers unintentionally brought the fungus on clothes or equipment from Europe. 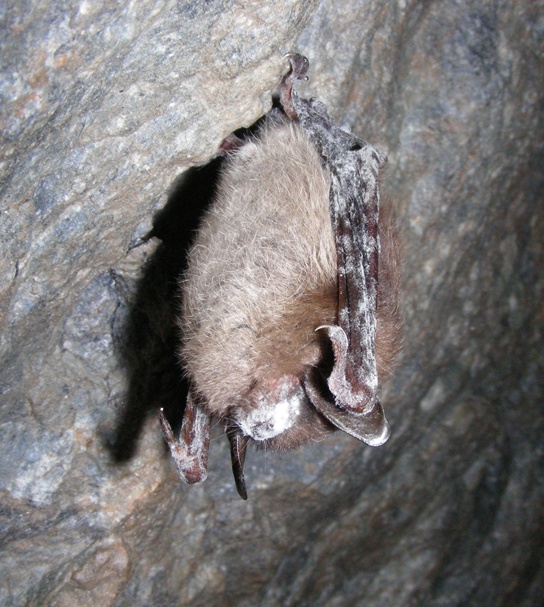 This little brown bat in Greeley Mine, Vermont, March 26, 2009, was found to have white-nose syndrome. (credit: Marvin Moriarty, USFWS)