Establishment of wildlife and ecosystem preserves is one of the key tools in conservation efforts. A preserve is an area of land set aside with varying degrees of protection for the organisms that exist within the boundaries of the preserve. Preserves can be effective in the short term for protecting both species and ecosystems, but they face challenges that scientists are still exploring to strengthen their viability as long-term solutions.

How Much Area to Preserve?

Due to the way protected lands are allocated (they tend to contain less economically valuable resources rather than being set aside specifically for the species or ecosystems at risk) and the way biodiversity is distributed, determining a target percentage of land or marine habitat that should be protected to maintain biodiversity levels is challenging. The IUCN World Parks Congress estimated that 11.5 percent of Earth’s land surface was covered by preserves of various kinds in 2003. This area is greater than previous goals; however, it only represents 9 out of 14 recognized major biomes. Research has shown that 12 percent of all species live only outside preserves; these percentages are much higher when only threatened species and high quality preserves are considered. For example, high quality preserves include only about 50 percent of threatened amphibian species. The conclusion must be that either the percentage of area protected must increase, or the percentage of high quality preserves must increase, or preserves must be targeted with greater attention to biodiversity protection. Researchers argue that more attention to the latter solution is required.

There has been extensive research into optimal preserve designs for maintaining biodiversity. The fundamental principle behind much of the research has been the seminal theoretical work of Robert H. MacArthur and Edward O. Wilson published in 1967 on island biogeography. This work sought to understand the factors affecting biodiversity on islands. The fundamental conclusion was that biodiversity on an island was a function of the origin of species through migration, speciation, and extinction on that island. Islands farther from a mainland are harder to get to, so migration is lower and the equilibrium number of species is lower. Within island populations, evidence suggests that the number of species gradually increases to a level similar to the numbers on the mainland from which the species is suspected to have migrated. In addition, smaller islands are harder to find, so their immigration rates for new species are lower. Smaller islands are also less geographically diverse so there are fewer niches to promote speciation. And finally, smaller islands support smaller populations, so the probability of extinction is higher.

As islands get larger, the number of species accelerates, although the effect of island area on species numbers is not a direct correlation. Conservation preserves can be seen as “islands” of habitat within “an ocean” of non-habitat. For a species to persist in a preserve, the preserve must be large enough. The critical size depends, in part, on the home range that is characteristic of the species. A preserve for wolves, which range hundreds of kilometers, must be much larger than a preserve for butterflies, which might range within ten kilometers during its lifetime. But larger preserves have more core area of optimal habitat for individual species, they have more niches to support more species, and they attract more species because they can be found and reached more easily.

Preserves perform better when there are buffer zones around them of suboptimal habitat. The buffer allows organisms to exit the boundaries of the preserve without immediate negative consequences from predation or lack of resources. One large preserve is better than the same area of several smaller preserves because there is more core habitat unaffected by edges. For this same reason, preserves in the shape of a square or circle will be better than a preserve with many thin “arms.” If preserves must be smaller, then providing wildlife corridors between them so that individuals and their genes can move between the preserves, for example along rivers and streams, will make the smaller preserves behave more like a large one. All of these factors are taken into consideration when planning the nature of a preserve before the land is set aside.

In addition to the physical, biological, and ecological specifications of a preserve, there are a variety of policy, legislative, and enforcement specifications related to uses of the preserve for functions other than protection of species. These can include anything from timber extraction, mineral extraction, regulated hunting, human habitation, and nondestructive human recreation. Many of these policy decisions are made based on political pressures rather than conservation considerations. In some cases, wildlife protection policies have been so strict that subsistence-living indigenous populations have been forced from ancestral lands that fell within a preserve. In other cases, even if a preserve is designed to protect wildlife, if the protections are not or cannot be enforced, the preserve status will have little meaning in the face of illegal poaching and timber extraction. This is a widespread problem with preserves in areas of the tropics.

Some of the limitations on preserves as conservation tools are evident from the discussion of preserve design. Political and economic pressures typically make preserves smaller, never larger, so setting aside areas that are large enough is difficult. If the area set aside is sufficiently large, there may not be sufficient area to create a buffer around the preserve. In this case, an area on the outer edges of the preserve inevitably becomes a riskier suboptimal habitat for the species in the preserve. Enforcement of protections is also a significant issue in countries without the resources or political will to prevent poaching and illegal resource extraction.

Climate change will create inevitable problems with the location of preserves. The species within them will migrate to higher latitudes as the habitat of the preserve becomes less favorable. Scientists are planning for the effects of global warming on future preserves and striving to predict the need for new preserves to accommodate anticipated changes to habitats; however, the end effectiveness is tenuous since these efforts are prediction based.

Habitat restoration holds considerable promise as a mechanism for restoring and maintaining biodiversity. Of course once a species has become extinct, its restoration is impossible. However, restoration can improve the biodiversity of degraded ecosystems. Reintroducing wolves, a top predator, to Yellowstone National Park in 1995 led to dramatic changes in the ecosystem that increased biodiversity. The wolves (see the figure below) function to suppress elk and coyote populations and provide more abundant resources to the guild of carrion eaters. Reducing elk populations has allowed revegetation of riparian areas, which has increased the diversity of species in that habitat.

Decreasing the coyote population has increased the populations of species that were previously suppressed by this predator. The number of species of carrion eaters has increased because of the predatory activities of the wolves. In this habitat, the wolf is a keystone species, meaning a species that is instrumental in maintaining diversity in an ecosystem. Removing a keystone species from an ecological community may cause a collapse in diversity. The results from the Yellowstone experiment suggest that restoring a keystone species can have the effect of restoring biodiversity in the community. Ecologists have argued for the identification of keystone species where possible and for focusing protection efforts on those species; likewise, it also makes sense to attempt to return them to their ecosystem if they have been removed. 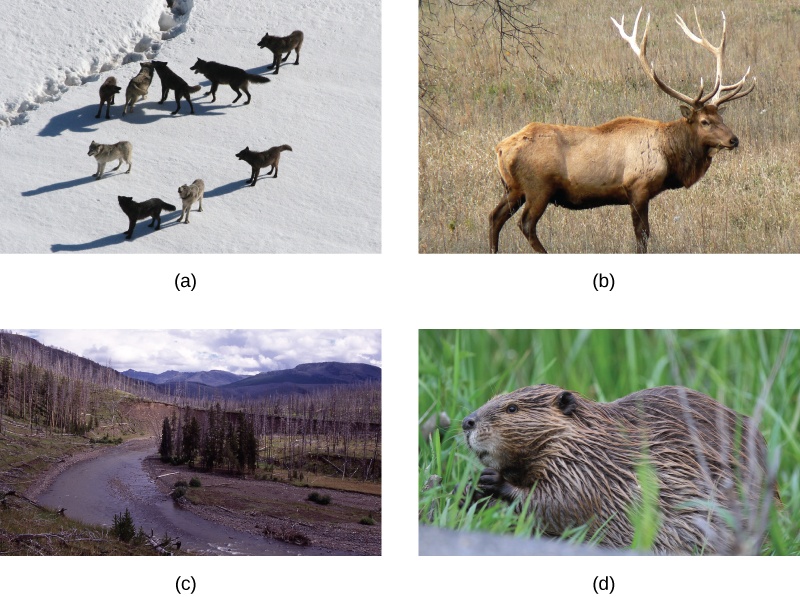 (a) The Gibbon wolf pack in Yellowstone National Park, March 1, 2007, represents a keystone species. The reintroduction of wolves into Yellowstone National Park in 1995 led to a change in the grazing behavior of (b) elk. To avoid predation, the elk no longer grazed exposed stream and riverbeds, such as (c) the Lamar Riverbed in Yellowstone. This allowed willow and cottonwood seedlings to grow. The seedlings decreased erosion and provided shading to the creek, which improved fish habitat. A new colony of (d) beaver may also have benefited from the habitat change. (credit a: modification of work by Doug Smith, NPS; credit c: modification of work by Jim Peaco, NPS; credit d: modification of work by “Shiny Things”/Flickr)

Other large-scale restoration experiments underway involve dam removal. In the United States, since the mid-1980s, many aging dams are being considered for removal rather than replacement because of shifting beliefs about the ecological value of free-flowing rivers and because many dams no longer provide the benefit and functions that they did when they were first built. The measured benefits of dam removal include restoration of naturally fluctuating water levels (the purpose of dams is frequently to reduce variation in river flows), which leads to increased fish diversity and improved water quality. In the Pacific Northwest, dam removal projects are expected to increase populations of salmon, which is considered a keystone species because it transports key nutrients to inland ecosystems during its annual spawning migrations. In other regions such as the Atlantic coast, dam removal has allowed the return of spawning anadromous fish species (species that are born in fresh water, live most of their lives in salt water, and return to fresh water to spawn). Some of the largest dam removal projects have yet to occur or have happened too recently for the consequences to be measured. The large-scale ecological experiments that these removal projects constitute will provide valuable data for other dam projects slated either for removal or construction.

The Role of Captive Breeding

Zoos have sought to play a role in conservation efforts both through captive breeding programs and education. The transformation of the missions of zoos from collection and exhibition facilities to organizations that are dedicated to conservation is ongoing. In general, it has been recognized that, except in some specific targeted cases, captive breeding programs for endangered species are inefficient and often prone to failure when the species are reintroduced to the wild. Zoo facilities are far too limited to contemplate captive breeding programs for the numbers of species that are now at risk. Education is another potential positive impact of zoos on conservation efforts, particularly given the global trend to urbanization and the consequent reduction in contacts between people and wildlife. A number of studies have been performed to look at the effectiveness of zoos on people’s attitudes and actions regarding conservation; at present, the results tend to be mixed.