Since the beginning of human agriculture more than 10,000 years ago, human groups have been breeding and selecting crop varieties. This crop diversity matched the cultural diversity of highly subdivided populations of humans. For example, potatoes were domesticated beginning around 7,000 years ago in the central Andes of Peru and Bolivia. The potatoes grown in that region belong to seven species and the number of varieties likely is in the thousands. Each variety has been bred to thrive at particular elevations and soil and climate conditions. The diversity is driven by the diverse demands of the topography, the limited movement of people, and the demands created by crop rotation for different varieties that will do well in different fields.

Potatoes are only one example of human-generated diversity. Every plant, animal, and fungus that has been cultivated by humans has been bred from original wild ancestor species into diverse varieties arising from the demands for food value, adaptation to growing conditions, and resistance to pests. The potato demonstrates a well-known example of the risks of low crop diversity: the tragic Irish potato famine when the single variety grown in Ireland became susceptible to a potato blight, wiping out the crop. The loss of the crop led to famine, death, and mass emigration. Resistance to disease is a chief benefit to maintaining crop biodiversity, and lack of diversity in contemporary crop species carries similar risks. Seed companies, which are the source of most crop varieties in developed countries, must continually breed new varieties to keep up with evolving pest organisms. These same seed companies, however, have participated in the decline of the number of varieties available as they focus on selling fewer varieties in more areas of the world.

Since the 1920s, government agriculture departments have maintained seed banks of crop varieties as a way to maintain crop diversity. This system has flaws because, over time, seed banks are lost through accidents, and there is no way to replace them. In 2008, the Svalbard Global Seed Vault (see the figure below) began storing seeds from around the world as a backup system to the regional seed banks. If a regional seed bank stores varieties in Svalbard, losses can be replaced from Svalbard. The seed vault is located deep into the rock of an arctic island. Conditions within the vault are maintained at ideal temperature and humidity for seed survival, but the deep underground location of the vault in the arctic means that failure of the vault’s systems will not compromise the climatic conditions inside the vault. 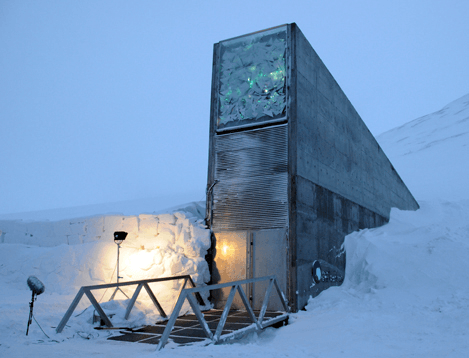 Crop success s is largely dependent on the quality of the soil. Although some agricultural soils are rendered sterile using controversial cultivation and chemical treatments, most contain a huge diversity of organisms that maintain nutrient cycles—breaking down organic matter into nutrient compounds that crops need for growth. These organisms also maintain soil texture that affects water and oxygen dynamics in the soil that are necessary for plant growth. If farmers had to maintain arable soil using alternate means, the cost of food would be much higher than it is now. These kinds of processes are called ecosystem services. They occur within ecosystems, such as soil ecosystems, as a result of the diverse metabolic activities of the organisms living there, but they provide benefits to human food production, drinking water availability, and breathable air.

Many honeybee populations are managed by apiarists who rent out their hives’ services to farmers. Honeybee populations in North America have been suffering large losses caused by a syndrome known as colony collapse disorder, whose cause is unclear. Other pollinators include a diverse array of other bee species and various insects and birds. Loss of these species would make growing crops requiring pollination impossible, increasing dependence on other crops.

Finally, humans compete for their food with crop pests, most of which are insects. Pesticides control these competitors; however, pesticides are costly and lose their effectiveness over time as pest populations adapt. They also lead to collateral damage by killing non-pest species and risking the health of consumers and agricultural workers. Ecologists believe that the bulk of the work in removing pests is actually done by predators and parasites of those pests, but the impact has not been well studied. A review found that in 74 percent of studies that looked for an effect of landscape complexity on natural enemies of pests, the greater the complexity, the greater the effect of pest-suppressing organisms. An experimental study found that introducing multiple enemies of pea aphids (an important alfalfa pest) increased the yield of alfalfa significantly. This study shows the importance of landscape diversity via the question of whether a diversity of pests is more effective at control than one single pest; the results showed this to be the case. Loss of diversity in pest enemies will inevitably make it more difficult and costly to grow food.