A separation process or technique is a method that converts a mixture or solution of chemical substances into two or more distinct product mixtures. At least one of results of the separation is enriched in one or more of the source mixture’s constituents. In some cases, a separation may fully divide the mixture into pure constituents. Separations exploit differences in chemical properties or physical properties (such as size, shape, mass, density, or chemical affinity) between the constituents of a mixture.

Processes and techniques are often classified according to the particular differences they use to achieve separation. If no single difference can be used to accomplish a desired separation, multiple operations can often be combined to achieve the desired end.

With a few exceptions, elements or compounds exist in nature in an impure state. Often these raw materials must go through a separation before they can be put to productive use, making separation techniques essential for the modern industrial economy. In some cases, these separations require total purification, as in the electrolysis refining of bauxite ore for aluminum metal, but a good example of an incomplete separation technique is oil refining. 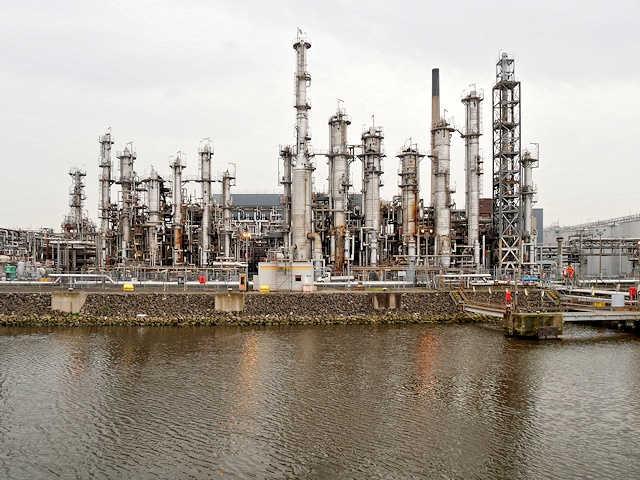 Crude oil occurs naturally as a mixture of various hydrocarbons and impurities. The refining process splits this mixture into other, more valuable mixtures such as natural gas, gasoline and chemical feedstocks, none of which are pure substances, but each of which must be separated from the raw crude. In both of these cases, a series of separations is necessary to obtain the desired end products. In the case of oil refining, crude is subjected to a long series of individual distillation steps, each of which produces a different product or intermediate.

The purpose of a separation may be analytical, can be used as a lie components in the original mixture without any attempt to save the fractions, or may be preparative, i.e. to “prepare” fractions or samples of the components that can be saved. The separation can be done on a small scale, effectively a laboratory scale for analytical or preparative purposes, or on a large scale, effectively an industrial scale for preparative purposes, or on some intermediate scale.

Mixtures come in many forms and phases. Most of them can be separated, and as already mentioned, the kind of separation method depends on the kind of mixture it is. Below are some common separation techniques:

This method is often used in the food industry. It is used to identify chemicals (coloring agents) in foods or inks. For example, if a scientist wants to know how many substances are in a particular blob of ink, paper chromatography can be used. 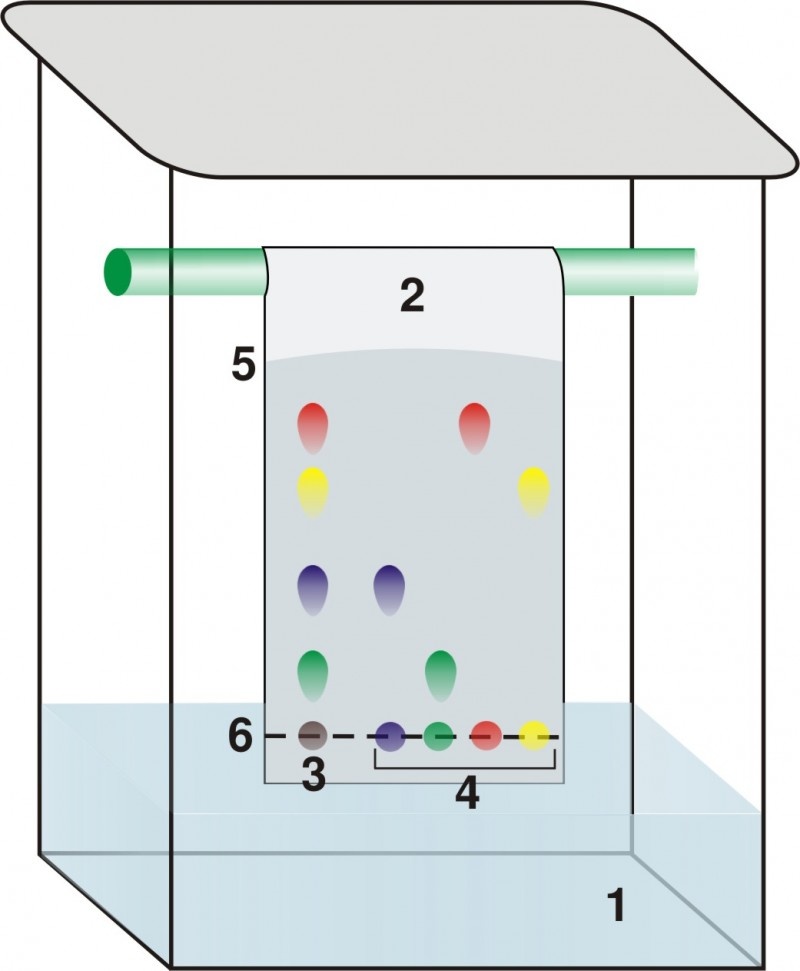 Paper chromatography is a technique that involves placing a small dot or line of sample solution onto a strip of chromatography paper. The paper is placed in a container with a shallow layer of solvent and sealed. As the solvent rises through the paper, it meets the sample mixture, which starts to travel up the paper with the solvent. This paper is made of cellulose, a polar substance, and the compounds within the mixture travel farther if they are non-polar. More polar substances bond with the cellulose paper more quickly, and therefore do not travel as far.

This is a more common method of separating an insoluble solid from a liquid. An example of such a mixture is sand and water. Filtration is used in water treatment plants, where water from rivers is filtered to remove solid particles. 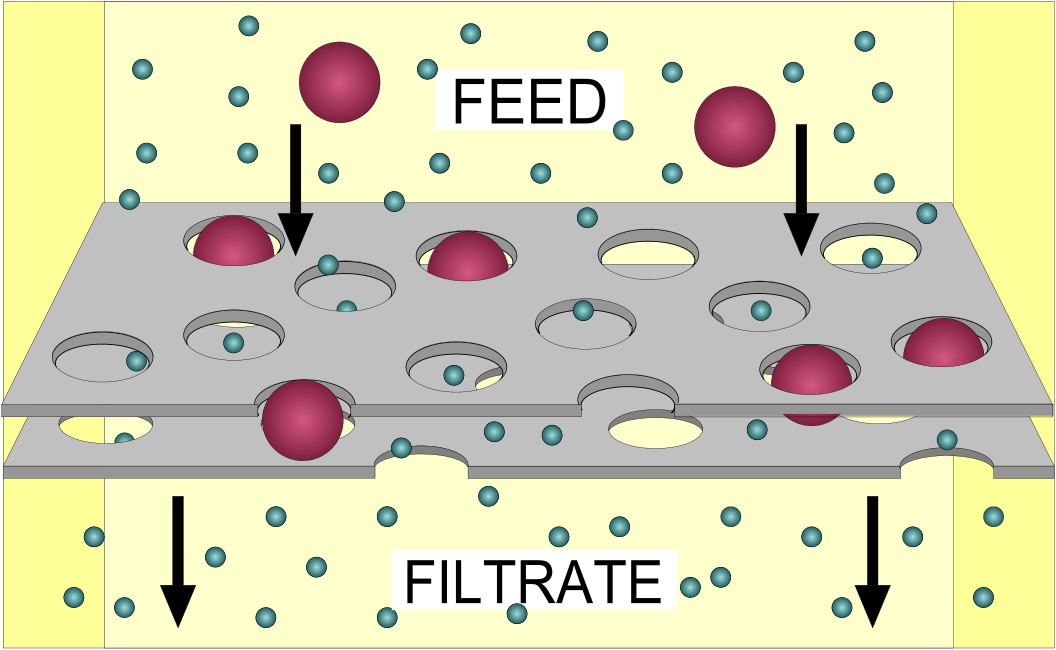 Diagram of simple filtration: oversize particles in the feed cannot pass through the lattice structure of the filter, while fluid and small particles pass through, becoming filtrate. Credit: Wikimedia Commons. CC BY-SA 3.0

Filtration is any of various mechanical, physical or biological operations that separate solids from fluids by adding a medium through which only the fluid can pass. The fluid that passes through is called the filtrate. In a school chemistry laboratory, the filtration medium is usually filter paper.

Evaporation is great for separating a mixture (solution) of a soluble solid and a solvent. The process involves heating the solution until the solvent evaporates (turns into gas) leaving behind the solid residue.

Distillation is the process of separating the components or substances from a liquid mixture by selective boiling and condensation. This method is best for separating a liquid from a solution. In a way, the concept is similar to evaporation, but in this case, the vapor is collected by condensation. For example, if you want to separate water from a salt solution, simple distillation would be great for this. 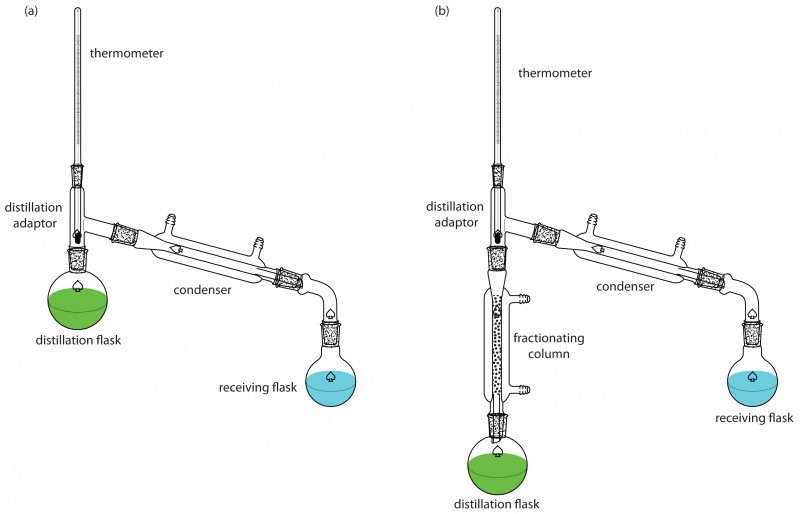 Typical experimental set-up for (a) a simple distillation, and (b) a fractional distillation. Credit: LibreTexts

Fractional distillation is the separation of a mixture into its component parts, or fractions. Chemical compounds are separated by heating them to a temperature at which one or more fractions of the mixture will vaporize. It uses distillation to fractionate.

Similar to simple distillation, fractional distillation is best for separating a solution of two miscible liquids. (Miscible liquids are liquids that dissolve in each other). The Fractional method takes advantage of the different boiling points of the two liquids.

Crystallization is the (natural or artificial) process by which a solid forms, where the atoms or molecules are highly organized into a structure known as a crystal. Some of the ways by which crystals form are precipitating from a solution, freezing, or more rarely deposition directly from a gas. Attributes of the resulting crystal depend largely on factors such as temperature, air pressure, and in the case of liquid crystals, time of fluid evaporation.

Recrystallization is a technique used to purify chemicals. By dissolving both impurities and a compound in an appropriate solvent, either the desired compound or impurities can be removed from the solution, leaving the other behind.

Magnetic separation is a process in which magnetically susceptible material is extracted from a mixture using a magnetic force. This separation technique can be useful in mining iron as it is attracted to a magnet.

Magnetism is ideal for separating mixtures of two solids with one part having magnetic properties. Some metals like iron, nickel and cobalt have magnetic properties whiles gold, silver and aluminum do not. Magnetic elements are attracted to a magnet.

Sublimation is the transition of a substance directly from the solid to the gas phase, without passing through the intermediate liquid phase. Sublimation is a technique used by chemists to purify compounds. A solid is typically placed in a sublimation apparatus and heated under vacuum. Under this reduced pressure, the solid volatilizes and condenses as a purified compound on a cooled surface (cold finger), leaving a non-volatile residue of impurities behind. Once heating ceases and the vacuum is removed, the purified compound may be collected from the cooling surface. 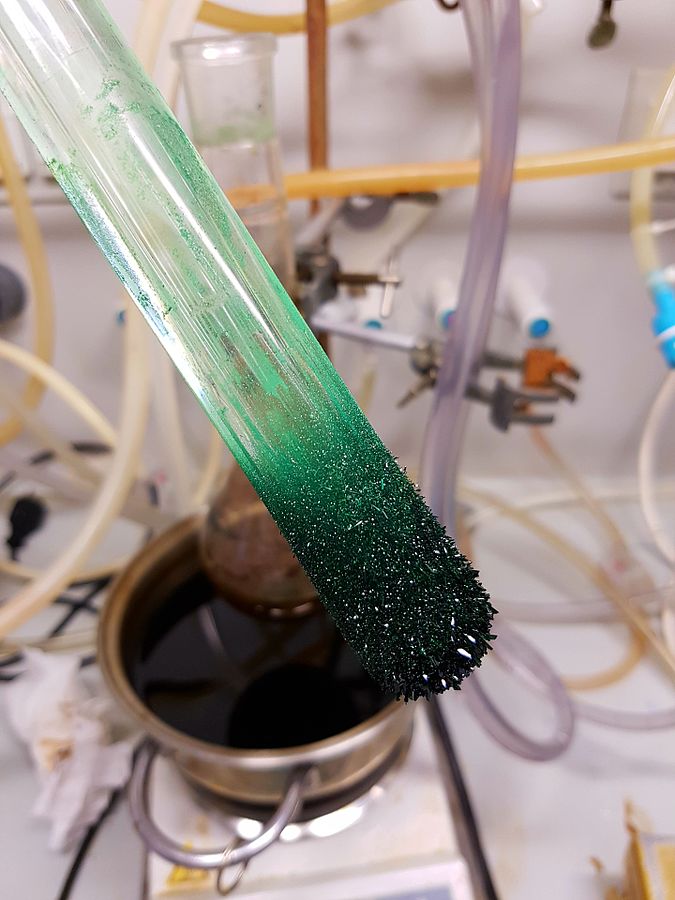 Centrifugation is a technique which involves the application of centrifugal force to separate particles from a solution according to their size, shape, density, viscosity of the medium and rotor speed. This process is used to separate two miscible substances, but also to analyze the hydrodynamic properties of macromolecules. More-dense components of the mixture migrate away from the axis of the centrifuge(move to the outside), while less-dense components of the mixture migrate towards the axis, i. e., move to the center. Chemists and biologists may increase the effective gravitational force on a test tube so as to more rapidly and completely cause the precipitate (pellet) to gather on the bottom of the tube.