A compound is a chemical substance that forms when two or more different elements combine in a fixed ratio. Water (\(\text{H}_{2}\text{O}\)), for example, is a compound that is made up of two hydrogen atoms for every one oxygen atom. Sodium chloride (\(\text{NaCl}\)) is a compound made up of one sodium atom for every chlorine atom. An important characteristic of a compound is that it has a chemical formula, which describes the ratio in which the atoms of each element in the compound occur.

A substance made up of two or more different elements that are joined together in a fixed ratio.

The figure below might help you to understand the difference between the terms element, mixture and compound. Iron (\(\text{Fe}\)) and sulfur (\(\text{S}\)) are two elements. When they are added together, they form a mixture of iron and sulfur. The iron and sulfur are not joined together. However, if the mixture is heated, a new compound is formed, which is called iron sulfide (\(\text{FeS}\)). 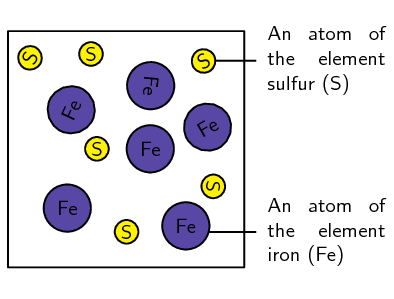 A mixture of iron and sulfur 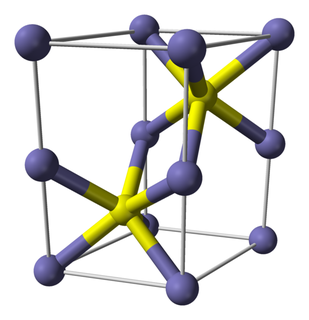 A model of the iron sulfide crystal

We can also use symbols to represent elements, mixtures and compounds. The symbols for the elements are all found on the periodic table. Compounds are shown as two or more element names written right next to each other. Subscripts may be used to show that there is more than one atom of a particular element. (e.g.\(\text{H}_{2}\text{O}\) or \(\text{NH}_3\)). Mixtures are written as: a mixture of element (or compound) A and element (or compound) B. (e.g. a mixture of \(\text{Fe}\) and \(\text{S}\)).

An element is found on the periodic table, so we look at the periodic table and find that only argon appears there. Next we decide which are compounds and which are mixtures. Compounds consist of two or more elements joined in a fixed ratio. Sand and stones are not elements, neither is blood. But silicon is, as is oxygen. Finally we decide whether the mixtures are homogeneous or heterogeneous. Since we cannot see the separate components of blood it is homogeneous. Sand and stones are heterogeneous.

The following substances are given: 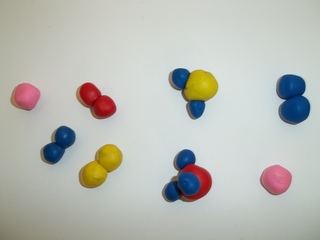 This article has been modified from "Pure Substances, by Siyavula, Grade 10 Science, CC BY 4.0. Download the article for free at Siyavula.