The practice of classifying organisms is referred to as taxonomy. Classification is usually a hierarchical process. One begins with general and broad differences, and then one systematically introduces more and more detailed and specific criteria.

We have prepared an activity in order to show why we try and classify living organisms, what sort of mental process it entails, and how it is done. The activity below is not Life Sciences related, but conveys the process of classification. Try and think of the problems that arise while classifying the items below. Can BBC news be entertaining too? If so, should it not be under entertainment? Do you think that the final level of classification is the most definitive?

To understand how classification systems work.

You have just drawn an example of a dichotomous branching diagram/ tree. All objects can be divided in this way. We call this a classification system.

Classification can be a tricky business. Problems arise when something can be classified to greater detail, or when an object or organism could belong to more than one category. Biologists have faced these classification conundrums for centuries when trying to classify organisms in one category or another.

Artificial classification systems, such as the grouping of vehicles into those that provide transport on land, water or air, are based on arbitrary groupings and have little meaning. The biological classification system, however, is based on research in anatomy, physiology, chemistry, genetics and many other branches of science. It is a scientific method of classification that groups organisms that share common features.

This classification is not random, but rather it describes evolutionary relationships. As a consequence, it is always necessarily hierarchical, where the important features inherited from a common ancestor determine the group in which the organisms are placed. For example, humans and whales both feed their young on milk, which is a characteristic inherited from a common ancestor. This similarity places them under the same class, mammals, even though their habitats are completely different.

Each organism is grouped into one of five large groups or kingdoms, which are subdivided into smaller groups called phyla (singular: phylum) and then smaller and smaller groups with other names. 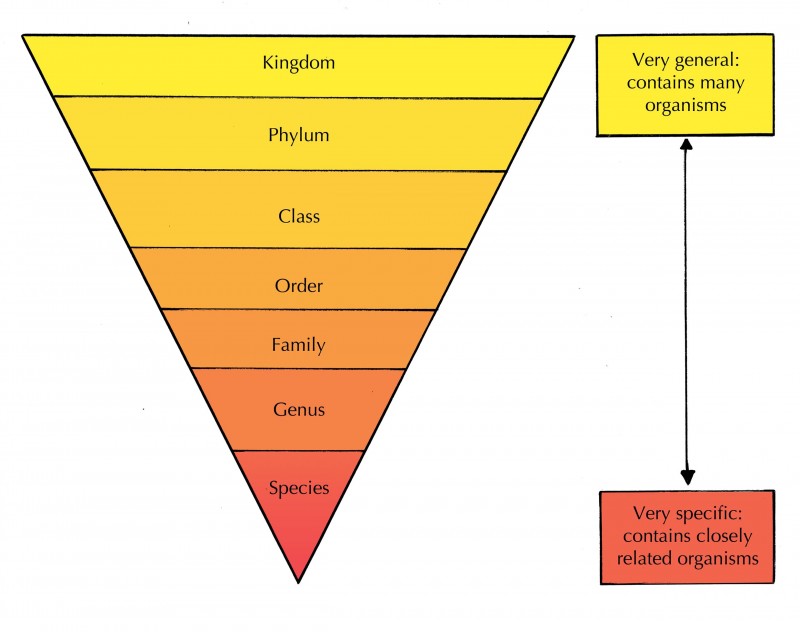 When trying to identify animals, it is this hierarchy or ranking scheme that we follow. We start by identifying the kingdom to which an organism belongs, then its phylum, class, family, order, and so on. This is similar to explaining how to find your house to a being from another planet. You would have to say Earth first, then Africa, then South Africa, then KZN, then Durban, then the suburb, then the road name and finally the house number. He would have to start searching in a big place and gradually work down to smaller places (or groupings).

A way to remember it is “Kwaito People Come Out From Gauteng Singing”. By learning this mnemonic you are going to remember the sequence in the classification system:

Optional Activity: Constructing a mnemonic to remember the sequence of the classification system

Construct a mnemonic in order to remember the classification sequence easily.

Make an easy to remember memory aid to remember the sequence of levels of the classification system.