Structure of the Heart

Structure of the Heart

The heart muscle is asymmetrical as a result of the distance blood must travel in the pulmonary and systemic circuits. Since the right side of the heart sends blood to the pulmonary circuit it is smaller than the left side which must send blood out to the whole body in the systemic circuit, as shown in the figure below.

In addition, the right atrium receives blood from the coronary sinus which drains deoxygenated blood from the heart itself. This deoxygenated blood then passes to the right ventricle through the atrioventricular valve or the tricuspid valve, a flap of connective tissue that opens in only one direction to prevent the backflow of blood. The valve separating the chambers on the left side of the heart valve is called the biscuspid or mitral valve. After it is filled, the right ventricle pumps the blood through the pulmonary arteries, by-passing the semilunar valve (or pulmonic valve) to the lungs for re-oxygenation. After blood passes through the pulmonary arteries, the right semilunar valves close preventing the blood from flowing backwards into the right ventricle.

The left atrium then receives the oxygen-rich blood from the lungs via the pulmonary veins. This blood passes through the bicuspid valve or mitral valve (the atrioventricular valve on the left side of the heart) to the left ventricle where the blood is pumped out through aorta, the major artery of the body, taking oxygenated blood to the organs and muscles of the body. Once blood is pumped out of the left ventricle and into the aorta, the aortic semilunar valve (or aortic valve) closes preventing blood from flowing backward into the left ventricle. This pattern of pumping is referred to as double circulation and is found in all mammals. 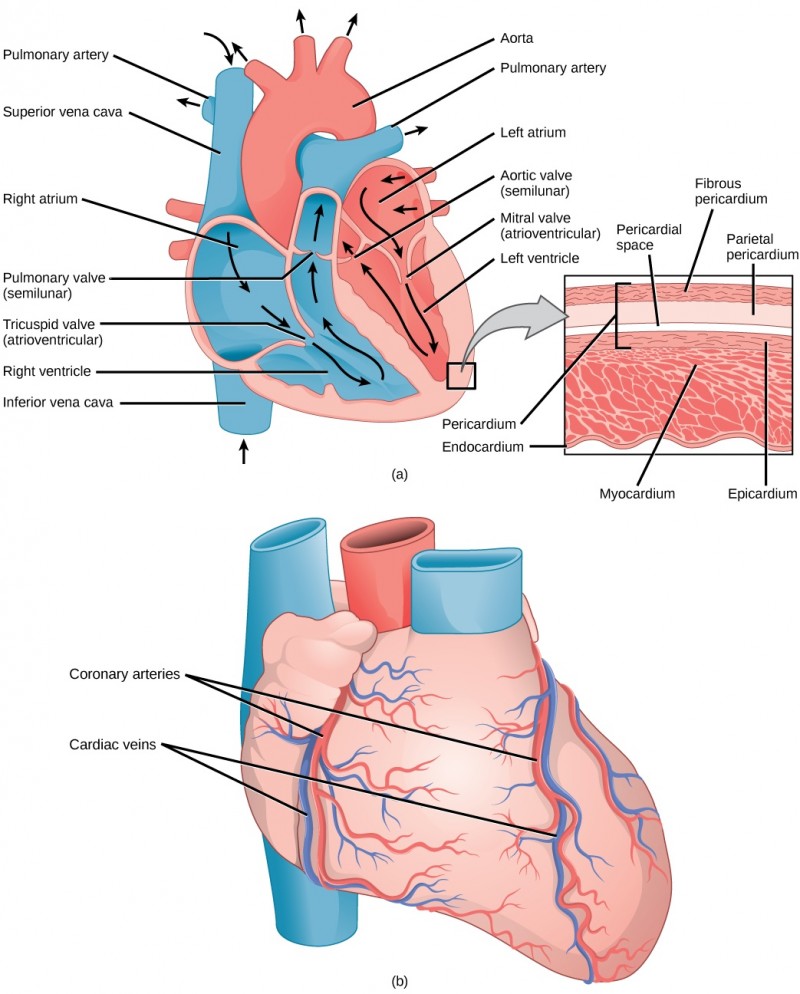 (a) The heart is primarily made of a thick muscle layer, called the myocardium, surrounded by membranes. One-way valves separate the four chambers. (b) Blood vessels of the coronary system, including the coronary arteries and veins, keep the heart musculature oxygenated.

Which of the following statements about the heart is false?

Blood travels through the bicuspid valve to the left atrium.

The heart is composed of three layers; the epicardium, the myocardium, and the endocardium, illustrated in the figure above. The inner wall of the heart has a lining called the endocardium. The myocardium consists of the heart muscle cells that make up the middle layer and the bulk of the heart wall. The outer layer of cells is called the epicardium, of which the second layer is a membranous layered structure called the pericardium that surrounds and protects the heart; it allows enough room for vigorous pumping but also keeps the heart in place to reduce friction between the heart and other structures.

The heart has its own blood vessels that supply the heart muscle with blood. The coronary arteries branch from the aorta and surround the outer surface of the heart like a crown. They diverge into capillaries where the heart muscle is supplied with oxygen before converging again into the coronary veins to take the deoxygenated blood back to the right atrium where the blood will be re-oxygenated through the pulmonary circuit. The heart muscle will die without a steady supply of blood. Atherosclerosis is the blockage of an artery by the buildup of fatty plaques. Because of the size (narrow) of the coronary arteries and their function in serving the heart itself, atherosclerosis can be deadly in these arteries. The slowdown of blood flow and subsequent oxygen deprivation that results from atherosclerosis causes severe pain, known as angina, and complete blockage of the arteries will cause myocardial infarction: the death of cardiac muscle tissue, commonly known as a heart attack.