Biology » The Circulatory System » Components of the Blood

Blood must clot to heal wounds and prevent excess blood loss. Small cell fragments called platelets (thrombocytes) are attracted to the wound site where they adhere by extending many projections and releasing their contents. These contents activate other platelets and also interact with other coagulation factors, which convert fibrinogen, a water-soluble protein present in blood serum into fibrin (a non-water soluble protein), causing the blood to clot. Many of the clotting factors require vitamin K to work, and vitamin K deficiency can lead to problems with blood clotting.

Many platelets converge and stick together at the wound site forming a platelet plug (also called a fibrin clot), as illustrated in figure (b) below. The plug or clot lasts for a number of days and stops the loss of blood. Platelets are formed from the disintegration of larger cells called megakaryocytes, like that shown in figure (a) below. For each megakaryocyte, 2000–3000 platelets are formed with 150,000 to 400,000 platelets present in each cubic millimeter of blood. Each platelet is disc shaped and 2–4 μm in diameter. They contain many small vesicles but do not contain a nucleus. 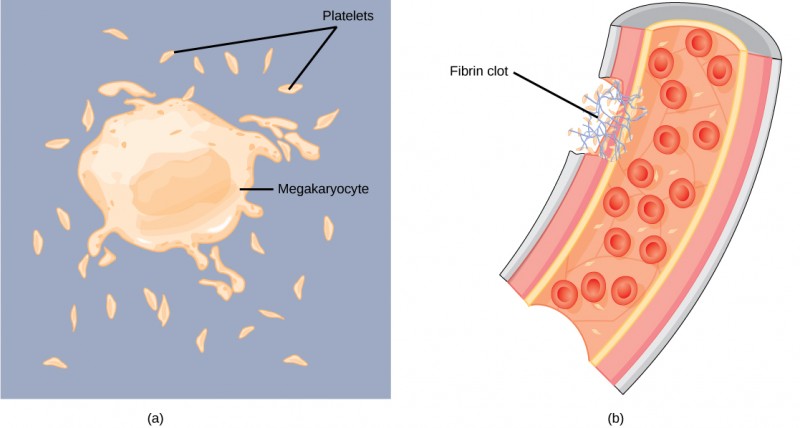 (a) Platelets are formed from large cells called megakaryocytes. The megakaryocyte breaks up into thousands of fragments that become platelets. (b) Platelets are required for clotting of the blood. The platelets collect at a wound site in conjunction with other clotting factors, such as fibrinogen, to form a fibrin clot that prevents blood loss and allows the wound to heal.