How Blood Flows Through the Body

How Blood Flows Through the Body

Blood is pushed through the body by the action of the pumping heart. With each rhythmic pump, blood is pushed under high pressure and velocity away from the heart, initially along the main artery, the aorta. In the aorta, the blood travels at 30 cm/sec. As blood moves into the arteries, arterioles, and ultimately to the capillary beds, the rate of movement slows dramatically to about 0.026 cm/sec, one-thousand times slower than the rate of movement in the aorta. While the diameter of each individual arteriole and capillary is far narrower than the diameter of the aorta, and according to the law of continuity, fluid should travel faster through a narrower diameter tube, the rate is actually slower due to the overall diameter of all the combined capillaries being far greater than the diameter of the individual aorta.

The slow rate of travel through the capillary beds, which reach almost every cell in the body, assists with gas and nutrient exchange and also promotes the diffusion of fluid into the interstitial space. After the blood has passed through the capillary beds to the venules, veins, and finally to the main venae cavae, the rate of flow increases again but is still much slower than the initial rate in the aorta. Blood primarily moves in the veins by the rhythmic movement of smooth muscle in the vessel wall and by the action of the skeletal muscle as the body moves. Because most veins must move blood against the pull of gravity, blood is prevented from flowing backward in the veins by one-way valves. Because skeletal muscle contraction aids in venous blood flow, it is important to get up and move frequently after long periods of sitting so that blood will not pool in the extremities.

Blood flow through the capillary beds is regulated depending on the body’s needs and is directed by nerve and hormone signals. For example, after a large meal, most of the blood is diverted to the stomach by vasodilation of vessels of the digestive system and vasoconstriction of other vessels. During exercise, blood is diverted to the skeletal muscles through vasodilation while blood to the digestive system would be lessened through vasoconstriction. The blood entering some capillary beds is controlled by small muscles, called precapillary sphincters, illustrated in the figure below. If the sphincters are open, the blood will flow into the associated branches of the capillary blood. If all of the sphincters are closed, then the blood will flow directly from the arteriole to the venule through the thoroughfare channel (see the figure below). These muscles allow the body to precisely control when capillary beds receive blood flow. At any given moment only about 5-10% of our capillary beds actually have blood flowing through them.

(a) Precapillary sphincters are rings of smooth muscle that regulate the flow of blood through capillaries; they help control the location of blood flow to where it is needed. (b) Valves in the veins prevent blood from moving backward. (credit a: modification of work by NCI)

Varicose veins are veins that become enlarged because the valves no longer close properly, allowing blood to flow backward. Varicose veins are often most prominent on the legs. Why do you think this is the case?

Blood in the legs is farthest away from the heart and has to flow up to reach it.

See the circulatory system’s blood flow in the video below.

The fluid in the lymph is similar in composition to the interstitial fluid. The lymph fluid passes through lymph nodes before it returns to the heart via the vena cava. Lymph nodes are specialized organs that filter the lymph by percolation through a maze of connective tissue filled with white blood cells. The white blood cells remove infectious agents, such as bacteria and viruses, to clean the lymph before it returns to the bloodstream. After it is cleaned, the lymph returns to the heart by the action of smooth muscle pumping, skeletal muscle action, and one-way valves joining the returning blood near the junction of the venae cavae entering the right atrium of the heart. 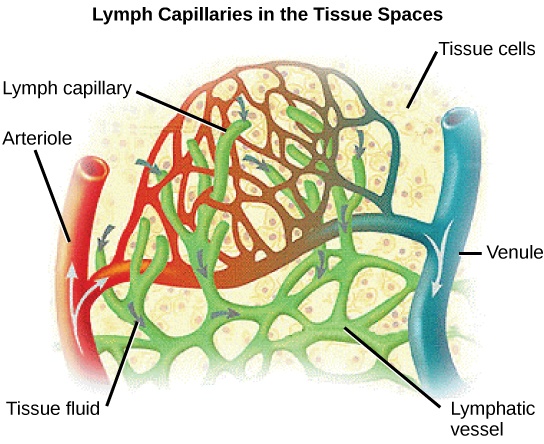 Fluid from the capillaries moves into the interstitial space and lymph capillaries by diffusion down a pressure gradient and also by osmosis. Out of 7,200 liters of fluid pumped by the average heart in a day, over 1,500 liters is filtered. (credit: modification of work by NCI, NIH)

Blood circulation has evolved differently in vertebrates and may show variation in different animals for the required amount of pressure, organ and vessel location, and organ size. Animals with longs necks and those that live in cold environments have distinct blood pressure adaptations.

Long necked animals, such as giraffes, need to pump blood upward from the heart against gravity. The blood pressure required from the pumping of the left ventricle would be equivalent to 250 mm Hg (mm Hg = millimeters of mercury, a unit of pressure) to reach the height of a giraffe’s head, which is 2.5 meters higher than the heart. However, if checks and balances were not in place, this blood pressure would damage the giraffe’s brain, particularly if it was bending down to drink. These checks and balances include valves and feedback mechanisms that reduce the rate of cardiac output.

Long-necked dinosaurs such as the sauropods had to pump blood even higher, up to ten meters above the heart. This would have required a blood pressure of more than 600 mm Hg, which could only have been achieved by an enormous heart. Evidence for such an enormous heart does not exist and mechanisms to reduce the blood pressure required include the slowing of metabolism as these animals grew larger. It is likely that they did not routinely feed on tree tops but grazed on the ground.

Living in cold water, whales need to maintain the temperature in their blood. This is achieved by the veins and arteries being close together so that heat exchange can occur. This mechanism is called a countercurrent heat exchanger. The blood vessels and the whole body are also protected by thick layers of blubber to prevent heat loss. In land animals that live in cold environments, thick fur and hibernation are used to retain heat and slow metabolism.