Biology » The Circulatory System » Components of the Blood

Components and Role of Blood

Components of the Blood

Hemoglobin is responsible for distributing oxygen, and to a lesser extent, carbon dioxide, throughout the circulatory systems of humans, vertebrates, and many invertebrates. The blood is more than the proteins, though. Blood is actually a term used to describe the liquid that moves through the vessels and includes plasma (the liquid portion, which contains water, proteins, salts, lipids, and glucose) and the cells (red and white cells) and cell fragments called platelets.

Blood plasma is actually the dominant component of blood and contains the water, proteins, electrolytes, lipids, and glucose. The cells are responsible for carrying the gases (red cells) and immune the response (white). The platelets are responsible for blood clotting. Interstitial fluid that surrounds cells is separate from the blood, but in hemolymph, they are combined. In humans, cellular components make up approximately 45 percent of the blood and the liquid plasma 55 percent. Blood is 20 percent of a person’s extracellular fluid and eight percent of weight.

The Role of Blood in the Body

Blood, like the human blood illustrated in the figure below is important for regulation of the body’s systems and homeostasis. Blood helps maintain homeostasis by stabilizing pH, temperature, osmotic pressure, and by eliminating excess heat. Blood supports growth by distributing nutrients and hormones, and by removing waste. Blood plays a protective role by transporting clotting factors and platelets to prevent blood loss and transporting the disease-fighting agents or white blood cells to sites of infection. 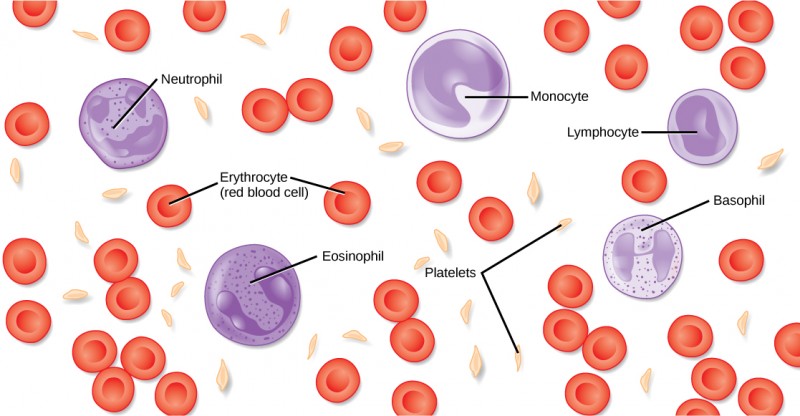